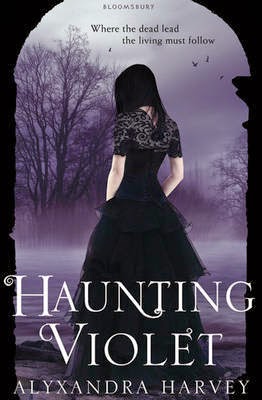 Violet Willoughby doesn’t believe in ghosts. But they believe in her. Now that she is being haunted by the ghost of a young woman, Violet can no longer ignore her unique ability. She must discover the mystery behind this girl’s violent death, to prevent the ghost’s twin sister from suffering the same fate. Fans of Alyx Harvey are in for a treat with this tale of unsolved murder and forbidden romance within the confines of Victorian high society.

I think i’m becoming a HUMONGOUS fan of Alyxandra Harvey!

In this tale she enchants us with yet another story based in the victorian society. Violet and her mother are not very wealthy so they pretend to be mediums that can see the dead. Along with them is Collin, a boy her mother had taken care of since he’s mother had died. This trio has conned their way into the elite society. Until one day. they receive an invitation to Lord Jasper’s manner house. Violet and her mother put on a well elaborated show for their audience leaving no evidence of their fake act. That is until Violet really starts to see ghosts. This ghost is a young girl who had been murdered and she won’t leave Violet alone until her murderer is exposed. But as Violet unravels the web of mysteries, her life keeps teetering on the very brink of danger…

I absolutely cannot say anything bad about this book. Violet is a really sweet but determined character. She hates lying to people but doesn’t have any choice unless she wants to end up homeless. Loved the romance between her and Colin who stood by her and trusted her whenever she needed it the most.  Violet’s friend Elizabeth was awesome! She was full of life and really added loads of humor to this book. All the characters were so special and unique-especially the mother.

The events that led up to finding the murderer were so intriguing and i kept asking myself who the hell the killer was! I loved the stuff that happened to Violet as she discovered her powers under the ghost’s stress, It outright creeped me out at times! All along she has to deal with the constraints of the victorian society, keep the eye of a potential husband, fight her feelings for Collin, deal with her crazy mother while finding a murderer!

Just a gripping, spine-tingling and haunting read from Alyxandra Harvey!One of the best standalones i’ve ever read!