Hello everyone! So i’m so excited for all of you to read Rachel’s interview! For those of you who don’t know, Rachel is the author of the Black Mage. Both books in the series have received an Astounding and well deserved five stars from my blog. If you want to check out the reviews, just click on the cover below!

ABOUT RACHEL
Rachel E. Carter lives in Placerville, California with her fiancé and their two spoiled pets: a feisty feline named Charlie, and Zoey, an Australian Shepherd who gets jealous of her own shadow. She loves to organize –and when she is not color-coding her closet she is always looking for the next good book. She grew up reading about magic, hot bad boys, and lady knights. The Black Mage, her debut series, is a tribute to all the things she never stopped loving. 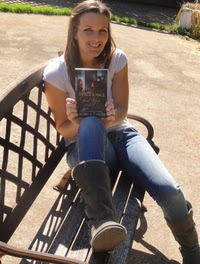 1.    How did you get inspired to write “The Black Mage” series?
My true inspiration came from a song I listened to in 7th grade (yea, that’s right, over 10 years ago!). I always get my favorite book/scene ideas when I listen to music. Anyways with the song I envisioned a guy & girl who were dueling in a huge arena with magic. They were rivals but you could tell there were some feelings involved that made it difficult to fight one another. Thus the concept of the Candidacy (a gladiator-style tournament with magic) and Ryiah/Darren were born.
2.    How did you feel when you held a tangible copy of your book for the first time?
I freaked out. Pretty much broke down sobbing. I don’t think anything will ever equate to that moment.
3.    Who is you favorite YA author and why?
I don’t really have just one, but if I had to I’d say it’s Tamora Pierce hands down. No one will ever be able to replicate her world-building, her kick-butt protagonists, her side characters, her awesome battle scenes, her magic… the list could go on forever. I have many favorite authors but Tamora Pierce is truly a queen in her own right.
4.  Which character did you have the most fun writing about?
Darren. I love his hot and cold personality and his back-and-forth dialogue with Ryiah. He’s complicated and his character evolves continuously over this series. I feel like readers never really know whether or not to trust him, and even after the second book is over he’s never what someone would describe as “safe.” He’s Mr. Complicated and I can’t wait for readers to learn more about his past in book three.
5.    Are you planning anything else after this series?
Ohhhh, so many more books and series. I have a list on my computer that is a mile long but I only trust myself to write one series at a time.
6.    Can you tell us a little bit about your journey from your draft to publication? Did you encounter any problems?
I quit my full-time job to work part-time and write two full days a week after I had written the first draft of “First Year.” Then it took me 4 months to finish, and when I did I really thought I was done. Words of wisdom: you are never, ever done with your first draft. And mine was particularly terrible: info-dumping and a very boring beginning (nothing like what people read in the book)… Needless to say, I queried agents too soon and got rejections. I spent months editing my manuscript and doing several rewrites until I finally got to a draft that landed me my publishing deal.
7.    What is your writing routine?
I have two full days off during the week to write, but most of the time is spent staring at the computer. My writing comes in waves, some weeks I do crazy word counts and the others I’m lucky to get a paragraph. When I do write each book’s plot is already broken down by chapter in advance with an expected word count, so that helps keep me on track. I also have book playlists on my iTunes so I have theme music for a lot of scenes I write and that helps. And coffee and Diet Dr. Pepper, because this writer needs a lot of caffeine.
8.    How do you deal with writer’s block???
Scream, cry, throw things… then do nothing. Stop trying and watch Netflix. Eat junk food. Clean the house. Read a good book. Then try to write again. Sometimes you just need to take a break from it, but never let yourself stay away more than a week. If it persists I download a new CD, because sometimes I just need new music to be inspired.
9. Any advice for future writers??
Read, read, read all your fave books/authors and study what works. Invent a style of your own and write what you always wanted to read. Don’t write because you want to make money/write the next big trend, write what you are passionate about because readers will be able to recognize that and hopefully share your passion!
EITHER OR
1. Hardcover or paperback? Paperback. Hardbacks don’t fit in my bookcase and they mess up my system.
2. coffee or hot chocolate? COFFEE! Iced coffee with 2% milk, no sugar –from Starbucks, to be exact.
3. Pizza or burgers? PIZZA. Vegetarian or chicken pesto!
4.Hunger Games or Divergent? Hunger Games, hands down!

I would like to thank Rachel for doing this interview!! <3 her answers! Don’t forget to check out her books guys!!