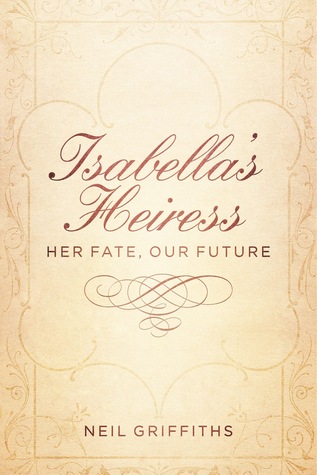 Isabella’s Heiress follows the adventures of Emma Elliott as she discovers that life can get so much more complicated after death.

Emma’s journey takes her from the afterlife to her old existence and back again. Along the way she meets friends, both old and new, and realises that nothing is as it seems. She discovers a world inhabited by two groups of angels, one bent on the subjugation and ultimate destruction of mankind, the other just as determined to ensure that this does not happen.

To leave this world, Emma must pass a deceptively simple task but with the forces arrayed against her, she starts to wonder why, of all the people who have found themselves in this world, she is being singled out for such special attention.

As her story unfolds, more questions arise in her mind. Who is Isabella, the woman she is constantly mistaken for?

Who are the mysterious Cado Angelus who seem to want Emma to fail no matter what the cost?And what part does Emma have to play in the events that will soon unfold in her world and ours.

The book opens up with a war scenery. Isabella seems like the hope of the people as she gives her soldiers encouragement before they plunge into the war, Isabella fights to her very last breath; until she mysteriously disappears from the battle…

Emma Elliott finds herself all alone in a misty version of London, she is approached by Father Eamon who tells her that she’s dead and is now in another realm-between heaven and hell and tells her that she now has a chance to choose her own fate. He reveals himself to be her guardian as she travels and explores the dark and misty version of London where a war between good and bad angels rages. But Emma has a dark past; one that fills her with guilt over the death of her little sister a few years back. But along for the journey, is Emma’s best friend who had died earlier and was now in the same realm as Emma. From what i’ve understood, these people living in that realm have tasks, but there are evil things that set out to stop them. But the mysteries keep growing in this book.. Who is Isabella and where does Emma fit, in this war?

I think this was a pretty interesting book. It was beautifully described and the author paid special attention to ever ounce of detail. The plot itself was extremely well thought out and it is the kind of book that keeps you guessing with mysteries. However, i will admit this is a little out of my comfort zone, That is, it isn’t YA. Emma is an adult so the story is kind of an adult/paranormal.

Character wise, i think Emma was an okay character, There was nothing really special about her-just her overwhelming guilt. I guess that’s because the author wanted to focus the attention on the plot itself. I did like Emma’s best friend though! She made me laugh quite a few times. I was a bit wary of Father Eamon at first, i didn’t know what to expect of him-was he a good guy or was he bad guy pretending to be a good guy? He had this kind of dignified air. It was a beautiful setting for this story to take place in; the constant mist that hovered really made you feel like something would just jump out of it any second!

I did really enjoy this book. However it was pretty long. I feel like the start was intriguing but slow and the real plot only evolves after a long while-so yeah it did drag on at times. Second thing is, i think this book lacked a tiny bit of romance. All my books have romance in them! Of course, this is my personal taste!!! I know that a lot of you will probably love this book! I just personally felt the absence of romance according to my likes.

I did love the ending!!!! I don’t know if this is a series because i think this can be read as a standalone. The epilogue really made me smile though!

Neil Griffiths weaves a beautiful story full of intrigue and worthy of being called a novel!