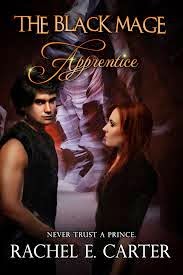 She survived a trial year at the Academy, but that was just the easy part…

Now sixteen-year-old Ryiah is an apprentice in Combat, her school’s most notorious faction of magic. When she finishes she will be a mage, but in order to do so she has to survive four years with a training master she hates and her old nemesis, Priscilla. To make matters worse the unwanted attraction Ry feels for her sometimes-friend-sometimes-rival Prince Darren is at an all time high –even though he is betrothed to the very girl she can’t stand.

Really, the only bright spot to Ryiah’s new life is the time she spends with her friends, including an older apprentice named Ian, who she finds herself thinking about quite often.

Just when things start to get comfortable they take a turn for the worse. An apprentice is killed in a rebel attack and several mages end up dead. Unwittingly, the apprentices find themselves in the midst of a budding unrest between Jerar and its northern neighbor, Caltoth. For Ryiah the impending conflict means many things, but as her apprenticeship draws to a close she finds her biggest problem at home.

Unfortunately for her, Darren’s not going anywhere.

*takes deep breath*. I think i’m in love with this book. *exhales*.

I love book 1. i love book 2. Simple as that. Okay whew, the first two lines were meant to give you the impression that i’m a calm and mature reader that just really loves this book. This is reality…(I’ve put together a little GIF mix of my feelings for this book. That should tell you exactly how i feel before i get to the actual review)

Okay now review time. Book 1 ended with Ryiah being selected to become an apprentice. This book deals with her journey from being a 2nd year to a 5th year. Ah our dear Ryiah hasn’t changed one bit! Well aside that she got better in Combat. She’s still extremely short-tempered, still has an attitude, still hates her Combat teacher and still likes Darren no matter how much she tries to deny it.

Darren is still the top best in Combat but in this book i think i felt like we got to know him a little more. There were sides to him i’d never thought i’d see but there they were! The action was over the top in this book, just completely thrilling! Another thing i wanted to say about Darren , i alternated between wanting to kiss him and slap him in the face. He was one of the most intriguing and infuriating characters i’ve ever read about. Sometimes i wante to puch him for what he was doing to Ryiah and sometimes to hug him when he got all determined to win her over. Then i wanted to console him when he was sad then knock him off a peg or two when he was being a show-off. I absolutely loved all those emotions the author put me through! He’s conflicting emotion were going to tear my neck off since i didn’t know what directiong his was aiming for anymore.

We get to see Darren’s life at the palace and also there’s some real danger and Ry gets thrown into it. Lives are lost, people are injures. friendships are teetering off the edge of a cliff. I liked hearing about Ry’s little brother-it really gave us the notion of time especially as Ry’s years flew by. Like the first book, there’s been so much tidal waves of emotion!!!

I don’t really like love triangles but i can’t really say this was one of them. For one i love Darren but i do have a soft spot for Ian and i felt really bad for him at times. I was laughing and grinning most of time due to Ry’s spontaneous and daring nature. Amazing heroine and she felt real. That’s another thing i love about this series, there’s no perfect heroine or perfect prince. The tension between Ry and Darren was literally sizzling every time they fought. As for Alex, still love his over protectiveness for Ry <3 so sweet! Makes me wish i had a brother like that! Nothing bad to say about this one. Just perfection and OMIGAWD-WHAT AN ENDING!!!!!

What the freak will happen in the 3rd book???when is it coming out!!????Will we hear bells tolling!!?????Will we be seeing a black cape on Ryiah soon!!????
*AND THE FANGIRLING CONTINUES*