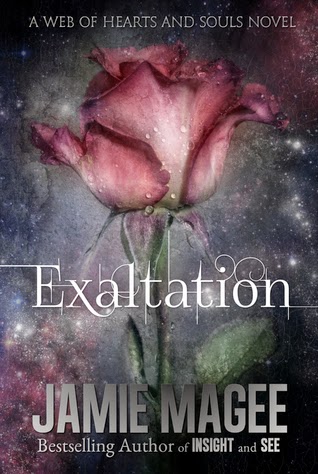 EXALTATION (A WEB OF HEARTS AND SOULS NOVEL)
BY JAMIE MAGEE

Was one soul worth the lives of millions? The quandary was one that Rydell King had no choice but to face. No matter the answer, the truth remained—innocence was created to destroy him. She was beautiful…extinguishing her to save his people seemed impossible, and maybe it was. As an immortal, his focus was to destroy the curse upon his people, as he devoured the emotion that bore him—exaltation, no matter the cost. She made him question everything.

Mercy had never been crueler.

HOLY CRAP I LOVE THIS BOOK!!! Basically you have these Kings of emotions like Exaltation, Anger, Obsession and so on. Rydell is like the second of the king of Exaltation and is known as the first. And there’s this prophecy that a girl would have to kill him and some others before she could finally defeat the king of exaltation and become a rightful monarch. This new queen was supposed to have three protectors and that she would defeat the king with a lover from the Grave! On the night Raven is born, Rydell feels something that shakes him to the core and he drives straight to the source.

He enrolls at Raven’s high school and starts flirting harmlessly with her because he doesn’t know who she is. He doesn’t know that they were destined to kill each other, And of course he falls for her. Raven has no clue of her witch origins of of the prophecy. But she does suspects her dad is something inhuman. After she kisses Rydell on a dare, things start to change for her. A protection that had been bestowed upon her was broken as so0n as their lips met!! Intrigued yet??

Beautifully written and the POV switched from Raven to Rydell and to Jamison (her dad). Her three protectors are her steps-sisters Ash and River, twins who love her unconditionally and finally one of her best friends Soren who’s in love with Ash. I loved their bond!! I particularly liked Jamison’s POV because this was the part where the mysteries emerged from so there were so many questions!! There was action since the king was hunting them Rydell down and planned to eliminate Raven before she gained strength. There’s even dimension travelling!!!!!NO WAY CAN YOU GO WRONG WITH THIS BOOK!!

I cannot wait for more of this series oh and MAJOR CLIFFHANGER!!! I <3 Rydell and Raven and i hope they’ll get their happy ending very soon! This was such a thrilling ride and definitely one of my FAVORITES!!!