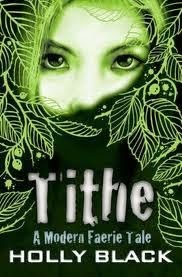 Welcome to the realm of very scary faeries!Sixteen-year-old Kaye is a modern nomad. Fierce and independent, she travels from city to city with her mother’s rock band until an ominous attack forces Kaye back to her childhood home. There, amid the industrial, blue-collar New Jersey backdrop, Kaye soon finds herself an unwilling pawn in an ancient power struggle between two rival faerie kingdoms — a struggle that could very well mean her death.

This book was pretty conflicting to me…Let me just say this is definitely not for younger readers. There’s a lot of swearing and stuff…

Anyways i’ve always wanted to read something from Holly Black so i picked this up from the store in my birthday book haul. Her writing is really Dark and alluring for one. I don’t think I like Kaye, she had this typical rebel teen attitude-the one who smokes and drinks. Her mother is seriously not right in the head even though it’s undeniable she absolutely loves her daughter. She doesn’t even care that Kaye had dropped out and never attended high school! She wants Kaye to be happy and do what she wants in life but come on guys you can give your kid freedom to pursue her dreams but she at least needs to attend if not graduate school to get somewhere in life!

The plot involving the faeries was well written and again-dark and very alluring. I was however extremely confused for about the first half of the book because i had no clue what was happening! Things shaped up afterwards but i wished i could follow the beginning. So the story is that Kaye was switched with a human baby and now she has to help her friends by offering herself up as a sacrifice…So hold one second, being a friend to someone means you can ask that person to die for you!? Kaye’s stupidity really irritated me, i mean how could you sacrifice yourself for people you only saw as a kid!

The love interest was awesome and i did think it was an okay book. I don’t know if the good outweighs the bad i’m just in the middle with this book. Roiben was an intriguing character and i feel that we’ll get to know him a lot more in the next book. No insta-love!  I felt that the plot was made for younger readers but it deals with a lot of mature content (drinking, smoking, sexuality…). There were a few twists but i think the best part of the book was the whole atmosphere in which the book was written. Dark, gritty and violent. I loved that because it really gave an original background to the story! The settings were super enticing as well!

I think this can definitely be read as a standalone but there is book 2 which i’ll be getting on with soon! I think everyone who likes dark reads or who loved RADIANT SHADOWS by MELISSA MARR like i did will love this one! But again i think this is for mature readers because of the contents of this book…