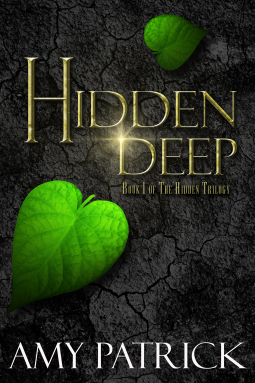 HIDDEN DEEP (BOOK 1 OF THE HIDDEN TRILOGY)
BY AMY PATRICK

Give in to the Glamour…
Sixteen-year-old Ryann Carroll has just run into the guy who saved her life ten years ago. You might think she’d be happy to see him again. Not exactly. She’s a bit underdressed (as in skinny-dipping) and he’s not supposed to exist.

After her father’s affair, all Ryann wants is to escape the family implosion fallout and find a little peace. She also wouldn’t mind a first date that didn’t suck, but she’s determined not to end up like her mom: vulnerable, betrayed, destroyed. Ryann’s recently moved back to her childhood home in rural Mississippi, the same place where ten years earlier she became lost in the woods overnight and nearly died.

She’s still irresistibly drawn to those woods. There she encounters the boy who kept her from freezing to death that long ago winter night and was nowhere to be seen when rescuers arrived. He’s still mysterious, but now all grown-up and gorgeous, too. And the more she’s with him, the greater the threat he poses to Ryann’s strict policy– never want someone more than he wants you.

Seventeen-year-old Lad knows the law of his people all too well: Don’t get careless and Don’t get caught. It’s allowed his race to live undetected in this world for thousands of years, mentioned only in flawed and fading folklore…

Lad’s never been able to forget about Ryann since that night ten years ago. When he sees her again, his fascination re-ignites and becomes a growing desire that tempts him to break all the rules. He’s not even supposed to talk to a human, much less fall in love with one.

And the timing is atrocious. The Assemblage is coming, the rift between the Light and Dark is widening, and mysterious celebrity fan pods are becoming more and more widespread and influential. Lad may have to trade his own chance at happiness to keep the humans, especially Ryann, blissfully unaware and safe.

Ryann, as a kid, once went into the forest while her family feasted at the dining table. She slipped silently into the alluring woods where she fell asleep and would have almost frozen to death if a little boy with curly blonde hair hadn’t saved her. A few years later, she comes back to live with her grandma and she can’t seem to resist the call of the woods once again. After returning from the woods she told her parents about the boy who’d saved her but they all thought she was crazy. After a while she started believing it too until she went for a swim in her underwear and found a big, beautiful blonde boy looking at her with astonishment. I loved their first meeting; it was cute and funny!!

After she realizes that he was the same boy who saved her, she keeps him a secret from her mom and grandmother. They forge a strong friendship as their meetings continue in the beautiful and enchanting landscape of the woods. At the same time, the hottest boy at school, Seems to be into Ryann but the one she’s interested in is weird, He’s always barefoot and climbs trees like Tarzan. Lad was a complex and mysterious character that Ryann was dying to unravel. As for Nox, their relationship was so easy and comfortable, she didn’t have to try to hard and everything just came naturally. And i have a feeling they could be amazing friends but with that cliffhanger at the end, i’m not so sure that’s all they can be. I know there’ll be loads more of him in Book 2!! YAY!!!

But as time goes on, Ryann and Lad grow into something more and they find true love and everything is all good until Ryann is tired of the secrets Lad seems to be keeping. I really didn’t expect it when he revealed his secret. The tension had been building up so much and i could not have anticipated that revelation. There was no insta-love just a gradual build up to their love that stemmed form their first meeting so long ago.

The plot itself was great and intriguing. I found myself flipping the pages faster and i seriously loved the protagonist. I found my heart breaking with her when things went southwards and i just felt so sad but then when she had hope so did it-it was just a whirlwind of emotions that you experience along with the protagonist! There is a little bit of forbidden love but you never really pay attention to it because you see how fiercely the characters love each other so you already knew that a love like that couldn’t possibly be denied!

As the story progresses there are more shocking revelations that surface and just left me open-mouthed! I LOVED THIS BOOK!!!CANNOT WAIT FOR THE SEQUEL!!!