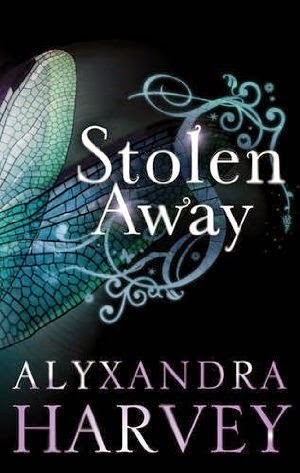 For seventeen years, Eloise Hart had no idea the world of Faery even existed. Now she has been abducted and trapped in the Rath of Lord Strahan, King of Faery. Strahan was only meant to rule for seven years, as Faery tradition dictates, and then give up his crown to another. But he won’t comply, and now chaos threatens both worlds.The only one who can break his stranglehold on the Faery court is his wife. . . Eloise’s aunt Antonia. Using Eloise to lure Antonia, Strahan captures his wife, desperate to end the only threat to his reign. Now Eloise must become the rescuer. Together with her best friends Jo and Devin, she must forge alliances with other Fae, including a gorgeous protector named Lucas, and Strahan’s mysterious son, Eldric—who may or may not betray them.

I loved Alyxandra’s writing since i read Breath of Frost. Since it was set in victorian times the language was pretty poetic and this novel, the writing was so modern it surprised me! In a good way of course :P! When i read the Summary it looked so intricate that i wondered how the author could cover all that in a standalone novel less than 300 pages! I expected it to be kind of rushed or something but it really totally was not. There were details and action and romance and funny moments=my kinda book!

I loved the friendship between Eloise, Jo and Devin. Even though Eloise was the main character i loved Jo a LOT more, She was witty, strong, funny and so loyal to her best friend, It all starts when Lucas keels in front of Eloise at an ice cream parlor and vows to protect her from a faerie king. Obviously she thought he was scary-i mean wouldn’t you if a hot medieval guy swore fealty to you in front of all your classmates? Well maybe some of you like me would be scared but since we’re book addicts i think we’re all secretly wishing we’re the heroine in the book!

Eloise goes home and things get weirder when Lucas shows up on her balcony and saves her from evil crows. She confides in her friends and then she gets kidnapped by an evil faerie king who uses her as bait to get his wife-her aunt-back.

In the meantime, Jo is being befriended and kissed(hotly) by Eldric who cannot seem to stay away from her! I loved the mystery surrounding Aunt Antonia..It was absolutely confusing and i had so many unanswered questions that i kept asking myself,. It made me want to keep reading so i could find this stuff out! The world building was breathtaking and i kept wishing i could see this stuff for myself.

The only thing i didn’t like in this book was a teeny tiny part to do the with love interests; Eldric and Lucas. For one I LOVED ELDRIC AND JO!!absolutely awesome and hot together!!Eldric is an intense character and i liked that a lot however i felt that Lucas was too perfect and there was no real story to him compared to Eldric. I can honestly say i like Jo and Eldric more than Eloise and Lucas,,,But i feel that i should have liked Lucas a little more because he is the main love interest of the main character, I did like him, i just felt there was no character development. All we know is that he’s sweet, shifts into a hawk and loves Eloise. That’s it. Whereas with Eldric, we know that he broods, has mysterious  and wicked smiles, he’s in pain and feels lonely because he hates his Dad and has never met his mom. he was the typical hot brooding guy with shadows and Lucas was the golden boy. and that’s not a bad thing i just wished there was more of a background to him!

Nevertheless i loved this book and it has made me love this authors writing even more!!Awesome standalone!

The Treachery of Beautiful Things Review