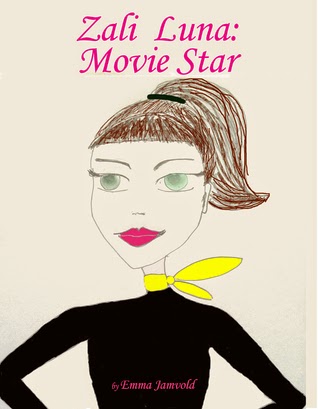 Sixteen-year-old school girl Zali Luna has just been cast in her first Very Big Movie. But while going to Sydney and working with her gorgeous, world famous co-star Oliver Lamond is a dream come, Zali also has a very big problem. She’s pretty sure that she’s the only sixteen-year-old girl in the world who hasn’t been kissed, and soon she’s going to have to kiss Oliver on screen. Zali’s determined to get some kissing practice in before the big day, but there’s her malicious rival, child star Emma Small to contend with, and then there’s Harry, who may have feelings for Zali that go deeper than just friendship.

This book is basically what every teen goes through before there first kiss and Zali Luna is no different-except for one tiny little thing. When most of us get our first kisses in restaurants in the park and so on-the point being in private. Zali’s first kiss is going to be on a movie set with hundreds of people watching and with one of the hottest actors in the film industry- Oliver Lamond! Can you picture yourself in her position??

Like any normal teen, Zali is freaking out. She’s super excited to land this job and we clearly see her passion and dedication. I thought her reactions and line of thought were pretty much what any teen would think of and that’s what made it a relatable read, Zali decides that she needs to be kissed before she shoots the kissing scene of film.

She targets Harry, her driver, to be her first kiss. Sometimes i couldn’t help but feel that she was using him only so she wouldn’t get embarrassed on camera and i kind of resented her for it, she was using him. But after, i think she realized at the same time that i did that the more she spent time with him the more she saw him as something other than her target. The moments she spent with him were sweet and sometimes she found herself missing his presence and thinking about him.

We got a real close-up to the filming industry so it was cool to know how it all goes down and how much work, stress and insecurities actors go through while we lounge on the couch with popcorn and watch them! Zali is getting pretty confused, if she falls for Oliver then what will happen to her goal of getting Oliver Lamond to fall for her???

This was a quick and light-hearted read that any teen or preteen going through the same insecurities should read! Selena Gomez got her first kiss on Zack and Cody with her mom and the whole crew watching!!! Can you imagine that!?