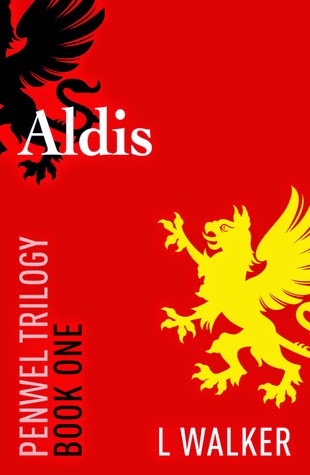 Aldis is an Epic Fantasy set in the land of Penwel.Jocelyne’s happy, but dull, life is completely shattered in one sunny afternoon.Fleeing from unknown pursuers, she finds herself in another world and discovers a family she never knew existed, including a twin brother with whom she shares an unusual connection. Before Jocelyne can settle into her new surroundings, where she is suddenly an important figure and magic is an accepted part of life, an old enemy resurfaces and the teenage girl must rely on a young bodyguard she hardly knows in order to save herself and her new found family.

*whistle* that was a LONG book! was i bored? Nope.

So the story starts off after Jocelyne fights with her mother and goes to cool off in the woods. However, when she gets back she finds her mother dead and the murderers are still in the house. She flees and escapes through a portal into the world of Penwel.

She finds out that the people she’s been drawing for a long time are actually her twin brother, Lorin, and her two step brothers, Hadwin and Anselm. I loved the sibling connection in this book, you could see the affection they have for each other, On top of finding a family she never knew she had, Jocelyne finds out she’s actually a princess! The royal siblings do have a secret;they have some magic. Magic that was supposed to have completely vanished and the King made sure no one knew about it because if not his children would be in danger.

So the first part of the book is kind of like her adjustment to her new family, coping with her mother’s death and learning the ways of Penwel. But things  go bad when Lorin is kidnapped one night and from the connection they have, Jocelyne knows that a creature was in her room. The rest of the siblings get a small group to set out and look for him while Jocelyne and her bodyguard, Ritter, are sent somewhere safe. But things go haywire and the pair are back in danger but with Jocelyne’s connection to Lorin, she sets out to rescue him.

For those who’ve read Game of Thrones, this is like a YA version of it. There’s always a shift in POV so we also get to see what Lorin is experiencing. The only thing i missed a little in this book was the romance but it was a real adventure! The writiting was beautiful and fans of Game of Thrones will absolutely love this thrilling new trilogy!