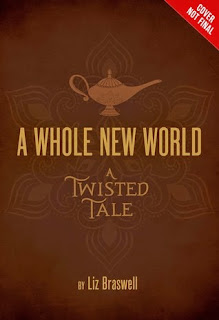 Welcome to a new YA series that reimagines classic Disney stories in surprising new ways. Each book asks the question: What if one key moment from a familiar Disney film was changed? This dark and daring version ofAladdin twists the original story with the question: What if Jafar was the first one to summon the Genie?
When Jafar steals the Genie’s lamp, he uses his first two wishes to become sultan and the most powerful sorcerer in the world. Agrabah lives in fear, waiting for his third and final wish.To stop the power-mad ruler, Aladdin and the deposed Princess Jasmine must unite the people of Agrabah in rebellion. But soon their fight for freedom threatens to tear the kingdom apart in a costly civil war.
What happens next? A Street Rat becomes a leader. A princess becomes a revolutionary. And readers will never look at the story of Aladdin in the same way again.

I am an absolute lover of retellings and i’ve never read one so far!

For the positives, i can say i loved the setting and the idea behind it. The writing was okay too but it didn’t have anything special…

Okay so Jafar gets Aladdin to steal the lamp and he manages to get it while Aladdin stays in the cave for two days. In the meantime, Jafar has wished to be sultan and be the most powerful wizard in the world. So when Aladdin wakes up to a whole new world-one where everyone is happy and there are no more street rats, it doesn’t take long for him to find that something is amiss.

One of my favorite parts of this book was Jafar. His was the most in-depth character i have seen so far. I actually pitied him sometimes and yet i found his evilness genius! I did really appreciate the ‘street rats’ atmosphere and the way they lived.

So my first issue with this book is the the fact that the synopsis says it’s dark. It definitely is a fresh intake but i found it more like a light quick read. I really couldn’t find  that ‘dark’ atmosphere i was practically craving through the whole book. It felt like a written version of the movie with a definite twist. But it didn’t have that atmosphere that other retellings have. I mean there were deaths but everything seems like it was toned down for a younger audience, like it was restrained.

My other issue would be the characters. Since it was a book, i was expecting to get to know these Disney characters that have enchanted us all in our childhood. I wanted to see them as people and not an animation like when i was a kid. Yes they were unique-Aladdin is witty and fast, Jasmine is a dedicated princess trying to reclaim her throne and all. But i just couldn’t view them as characters. It didn’t really feel like a YA novel at all… I also felt the lack of romance between Jasmine and Aladdin.

I was really looking forward to reading this but it didn’t quite live up to my expectations.