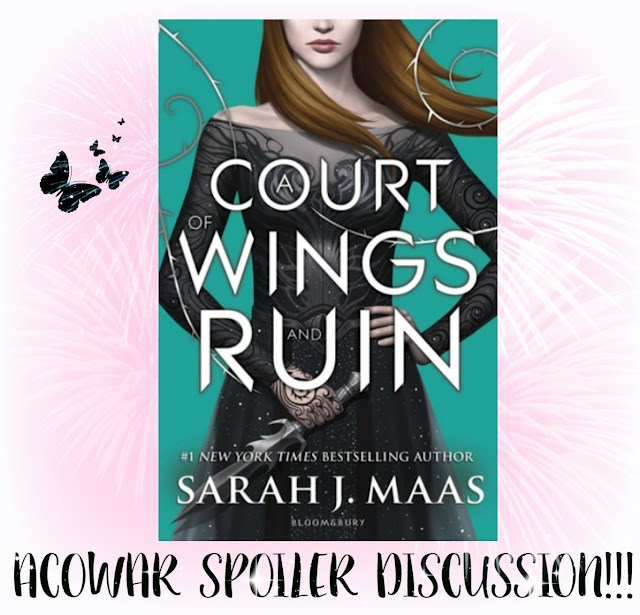 ACOWAR has literally been the most awaited book of 2017! I stayed up all night until it was delivered on my kindle at 4.00 a.m. I started readign straight away and finished at around 20.30!!! I’m so proud of myself because it is the largest book i’ve ever read in one day!

So first thing’s first, Feyre in the Spring Court be like

No but seriously, Feyre was absolutely phenomenal in this book! Badass and kickass don’t even begin to describe her! You could really see how happy and at ease she was at the Night Court compared to the Spring Court mostly because we could compare her to another outsider-Lucian.

I’ve always loved Lucian! Even though in ACOMAF i get that he was too busy worshiping Tamlin to help Feyre but i always liked this dude! And omigosh Calanmai!!!!!! I actually did not hate Tamlin after ACOMAF-i didn’t like him at all but i didn’t hate him. But after i found out that because of him Lucian had to perform the ritual with that conniving Bitch-excuse the language-Ianthe, i totally hated him! My poor Lucian!!!! But for the rest of the book i absolutely loved him! Ugh there’s so much heartache surrounding him and the fact that Elain was in love with another man!!!! And now i think Azriel is gonna swirl up trouble between them.

Am i the only one that doesn’t like Elain? I get her character and she’s super well written but i just don’t like her at all. Nesta however i’m really starting to like. I really didn’t know if i hated or liked her in the previous books but towards the end of ACOWAR she started to grow on me! She was really the pillar of strength and the idea that She took something back from the Cauldron? YES. YES JUST YES. Nesta’s portrayal was so feral, sharp, wild, untamable (I don’t that that’s a word) and AMAZING!!!! Taking something from the Cauldron is just somethign she would do!
AZRIEL OMIGAWD I THINK I LIKE HIM MORE THAN RHYS <3
“Chain me to a tree, Rhys,” Azriel said softly. “Go ahead.” He began checking the buckles on his weapons. “I’ll rip it out of the ground and fly with it on my damned back.”
Did anyone else see sparks between him and Elain?

Cassian my beautiful Cassian.I cried, i full on cried when we learned his wings were cured!!!

“A shadow slammed into the earth before us, cracking the ice toward every horizon. Not a shadow. An Illyrian warrior. Seven red Siphons glinted over his scaled black armor as Cassian tucked in his wings and snarled at Eris with five centuries’ worth of rage. Not dead. Not hurt. Whole. His wings repaired and strong.”

Ianthe-I AM THRILLED ABOUT HOW SHE DIED. YES. YES. YES. But the Suriel? I really couldn’t believe our favorite Gossip Girl died and SJM did confirm our suspicion that in ACOTAR when the Suriel had said “Stay with the High Lord,” he’d meant Rhys not Tamlin.


Now on to Mor’s confession! So Yes i’m so happy for Mor but at the same time i did feel a lot of chemistry between Azriel and herself so i’m just wondering if SJM came up with this twist in ACOWAR because of all the hate she was getting due to the lack of diversity or if that was legitimately always the plan for Mor? Either way, no complaints for me here but PLEASE SOMEONE GET ME A BOOK ABOUT AZRIEL!!! I volunteer myself as his mate.

It was also super interesting to meet all the other high lords and explore their territories. One thing SJM does FLAWLESSLY is her world building.

One of the reasons i was so excited for ACOWAR is that this is the first time SJM ever finished a series so what does that say about how she’ll end ToG? Will she play it safe again? No idea! I was in need of a hug after the end though!
Kudos to SJM for including diversity! Basically SJM has been attacked for the lack of diversity in her books but we have to remember that she’s a white female and doesn’t have the same background as a POC! She’s writing what she knows and though i know it bothers a lot of people that the POC in her books were either non-existent or killed off, we cannot make her write what we want. In ACOWAR she really made an effort!

Now don’t get me wrong, I LOVED THIS BOOK SO MUCH!!!! But i still prefer ACOMAF…Even though this book had loads of Azriel… Did i love it-YES YES YES YES! But it still falls short of ACOMAF for me :/ But it’s still a 5 star read!
So please don’t hate me and please understand and believe me when i say i love every single one of those characters! But does anyone else feel that Sarah was a little too convenient in her ending? I was waiting for at least one death to break my heart and tear me apart because this series was so epic i felt like it needed that ground breaking and heart aching finale. The Archeron father doesn’t count and although i BAWLED MY EYES OUT when i thought Rhys died, the end was too cheesy for a battle that could supposedly turn the world upside down.
I kind of wished Sarah had taken a risk instead of playing it safe *hides from glares*. Like Amren coming back? That was just way too happy for me…ugh this is hard to explain. As a fan i am thrilled that everyone survived but as a reader who thrives on books that bring out emotions, i really didn’t feel that rush of emotions at the very end that followed ACOMAF, and the rest of the ToG books.  When i finished the book i just put it down-sure my mind was reeling a little and it hit me that OMIGOSH RHYS AND FEYRE’S STORY IS OVER but i wasn’t completely shaken and rattling from the end-which i thought we would have had with ACOWAR. For such an epic story with epic stakes i felt like someone just needed to die. We needed a heart wrenching impact ending. It did not have that EPIC ending that i’ve been waiting for for a whole year…of course that’s just my personal opinion and everyone is welcome to their own 🙂 Please don’t attack me!
Let’s just go back to Amren for a second because i remember that was the part that ACOWAR kind of lost its glossy sheen to me. That beautiful poetic unleashing of Amren as she soared the skies and defeated the enemies? YES. YES. This is what SJM is epic for, these groundbreaking, heart stopping moments that leave you in complete awe of her characters. And then, Amren comes out of the cauldron to live her happily ever after. wait. what? I love Amren but seriously? After we spent two books about how dangerous she was and that when she was unleashed everyone should cower in fear she’ just gonna reappear in the cauldron as a high fae? From that point on ACOWAR just kind of breezed by, i lost the rush of emotions that i’d hoped would carry on till the very end.

And is anyone else seeing a trend in SJM’s books? This paragraph has EoS spoilers so if you haven’t read this book please skip this paragraph! In both ACOMAF and CoM Chaol/Rhys get captured and Celeana/Feyre save their asses in deadly fights and then that epic battle at the end of ACOWAR with all the allies coming in was a little too similar to the end of EoS where Aelin’s allies arrived…I get that the end of EoS wasn’t a battle but still..then the part where Feyre had to reforge the Cauldron-just like Aelin has to reforge the lock? And the similarities between Aelin and Rhysand? Both are always calculating one step ahead and keeping all their decisions secret from their friends. It did bother me a little.
*UPDATE* Thanks to Soudha in the comments i found another similarity-both the king of Hybern and the King of Adarlan have no names :3

Also one thing that made me gag a little. I am a Feysand shipper till the end! I LOVE THEM SO MUCH! But this quote went a little too far in my opinion.

“As much as i’d like to see you attempt to lick off a week’s worth of dirt, sweat, and blood…”His eyes gleamed with the challenge, and i laughed again.

No. Just no. This attempt at sexy feysand time just fell completely short. For some reason, i wasn’t fangirling about Feysand moments except for the part where they reunited. And this i only realized after i finished the book-and i still don’t understand why i wasn’t fangirling as much as i was in ACOMAF.

OH OH WAIT I HAVE A THEORY!!!! So Feyre threw the book into the void right? WHAT IF THAT WAS THE WALKING DEAD FROM THE TOG SERIES!? AND IT’S WRITTEN IN WYRDMARKS
“But the gold was engraved with symbols only one being on this earth knew how to read, and she was gone. I hurled the damn thing into the void inside the Cauldron.”
Also this reminded of the Eye Of Elena from ToG.
“The Carver traced three overlapping, interlocked circles in the dirt.”
Was this a coincidence? Was SJM trying to make a connection to ToG? Or is it just a similarity like the others that she might not have known she was making.
I know a lot of people felt quite unfulfilled by the ending because there were so many unanswered questions but it didn’t bother me at all because there is ACOTAR 4-just not with Feyre and Rhys as MCs.

So Queen Mass has left A LOT of open ended strings that could potentially turn into a new story! There are just so many unresolved things at the end i don’t know in what direction the rest of the books will go. Maybe Lucian, Elain and Azriel? Maybe to the dark Master that turned the mortal queen into a firebird? Maybe Drakon and Myriam’s story?

There’s absolutely no question that SJM is a talented author with an amazing ability to create the most beautiful, complex and rich fantasy worlds. Her writing just keeps getting better with every book! This book had me on the edge of my sea, i was never ever bored and i love all these characters and the story so much! That’s why this book is still a 5 star read!

Do i like it better than ACOMAF? Nope ACOMAF was much much better to me.
Was it still entertaining as hell? YAS WITHOUT A DOUBT.
Was it worth the year long wait spent agonising fangirling? *screeching halt* No i’m sorry as much as i loved this book, it didn’t send me into a whirlwind of emotion that i’d expected and hoped for once i was done. Not like EoS which left me in a book slump. After ACOWAR i was like “omg it’s really over someone hold me i’m gonna miss them” and a few hours later i stared reading something else. No book slump, no staring at the wall trying to process everything that happened.

Anyways these are just a few of my thoughts i thought i’d share 🙂 Hope everyone has a wonderful week!

THE LAST EVER AFTER REVIEW