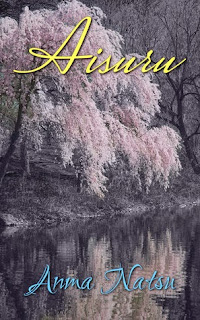 For the last eight years, Sakura Takeshi has been counting down the time till her life ended. Though she survived the attack that left her an orphan, it’s always been borrowed time as her damaged body continued to break down.She told herself she was ready, that she had come to terms with dying before she reached 19. Then she found Kazuki lying wounded in her garden. His arrival opens the door for her whole world to change, but is it too late for her to learn to live, or to love, when there are only months left in her life?Set in Hakodate, Japan, Aisuru is a young adult fantasy romance that will appeal to readers who enjoy shōjo manga and Japanese light novels, have a fondness for magical realism, and who would like more young adult stories that are just a bit different from the norm.

Sakura has had a rough life. Her father had been mentally ill and had killed her mother and after stabbing Sakura in the heart and lungs, killed himself. Sakura managed to survive and went to live with her father’s friend. But she’s lived with the fact that her organs would fail soon because of the punctures caused by the stabbing. When her guardian dies, Sakura is left more alone then she already was. She doesn’t have any friends at school because she doesn’t want people to hurt when she passes away, and so she lives a lonely life.

Kazuki is the heir to the throne of his kingdom. He however does not want to be king and promises to give the throne to his younger brother. But one day, his brother tells him he will never forgive him and disappears. Kazuki has no idea what he did to his brother and with his father missing, the kingdom is left in his care. But then one night, Kazuki receives a letter from his brother to meet him. But instead of reconciliation, Kazuki is attacked by his brother and escapes, beaten and bruised into the human world where his old friend, Sakura’s late guardian, had once lived.

Upon learning of his friend’s death, Kazuki is curious about Sakura and hides in her house while his brother is still out there. Slowly, the two discover each other and the love they could share.

Sakura has got to be one of the sweetest characters i’ve ever read about! Kazuki’s innocence about the human world and child-like behavior was amusing and then he would just be completely mature!! *sigh* Loved the characters and world build up. I would say the story focuses more on the love story than Kazuki’s kingdom and all but i think it balanced out perfectly! There was a steady amount of suspense maintained throughout the book so that the reader doesn’t get too lost in the love story and stray from the mystery regarding the attack.

I am a BIG FAN of manga! and throughout this novel i was envisioning it like i was watching a manga and wow i can just see this becoming one!! The setting was gorgeous, i loved learning about the culture in Japan and how they live. The writing was beautiful and gave you the impression you were listening to a faerie tale!

This was definitely a unique and heart felt romance story that every manga/YA reader should try! It has a ‘the fault in our stars feel’ but much sweeter and the book is not actually focused on the dying part. It’s more focused on love and sacrifice. The ending was bittersweet for me and yet just perfect. It leaves the ending to the reader’s imagination but it is a happy one with endless possibilities!!