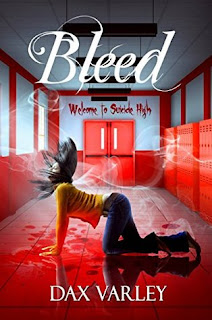 LIFE IS A NIGHTMARE FOR Miranda Murphy. Without knowing when or why, blood oozes from her palms—an anomaly that makes her feel like a freak. But her abnormality is now the least of her worries. She’s just enrolled at “Suicide High.” Three deaths in three months—one occurring just days before her arrival.
When she bumps into a cute boy named Jake, things don’t appear so glum. Especially since Jake’s a psychic who can predict the immediate future. But his gift of sight can’t prepare her for the horrors that await.
Through Jake, Miranda meets three other extraordinary students:
Topher – who can heal by touch.
Sam – who eats the sins of the dead.
And Xyan – who speaks and understands all languages.
It’s then that Miranda learns the secret behind why she bleeds.
When it becomes evident that supernatural forces are at play, the five determined friends team up. Now it’s up to them to destroy the evil that’s infecting their school.

Miranda is an anomaly, her palms spurt out blood. Enrolled at a new school, she meets three other “gifted students” who can see the future, sin-eat and speak all the languages! But Miranda’s new school has been nicknamed “suicide high” for a reason. Students keep committing suicide and it’s up to these four to figure out why these kids are killing themselves.

Plot wise-wow! Super original! A person who shoots out blood? You gotta admit that definitely peaks your curiosity! I loved the mystery that kept going throughout the book. I kept asking myself why they kept wanting to die and who was behind it-was there even someone behind it in the first place?

Dax Vaeley is definitely an amazing writer with lots of talent! Her writing keeps you on an emotional roller coaster! I loved that there was alternating POV’s so you really got to know each character individually! Sam has got to be my favorite! He’s sweet and so hilarious i was laughing through almost all his dialogues! Xyan is the tough one-at first she gave the impression of a bully and i was quite wary of her but then i warmed up to her. The author keeps the suspense and twists going through the whole novel-keeping you on the edge of your seat and making you experience those nail-biting-ohmigod-what’s-gonna-happen-next moments!

I just have to mention the violence in this book! AMAZING! It actually gave me chills and i loved reading it at night on my kindle with all the lights off (yeah i’m weird like that 😛 ) Vivid, is the only way to describe it-it felt like you were there watching the scenes unfold with all the details-just wow!

Overall a great read, for anyone who loves Christopher Pike and likes a bit of horror in there YA will absolutely love this book!