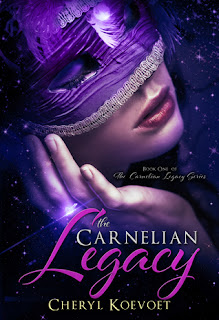 Marisa MacCallum always believed that the man of her dreams was out there somewhere. The problem is—he’s in another dimension.
After the death of her father, eighteen-year-old Marisa’s life is on the verge of imploding. She seeks comfort on her daily ride through the woods of Gold Hill, but when a mysterious lightning storm strikes, she is hurled into the ancient, alternate dimension of Carnelia where she is discovered by the arrogant but attractive nobleman, Ambassador Darian Fiore.
Stranded in a world teeming with monsters, maniacs and medieval knights, Marisa is forced to join Darian on a dangerous mission to negotiate peace with his cousin and archenemy, Savino da Rocha. Along the way, she starts to see Darian’s softer side and finds herself falling in love. But once she learns that he is locked into an arranged marriage, her heart shatters.
When Savino falls for her charms and demands her hand in exchange for peace, Marisa is faced with an impossible choice: marry the enemy of the man she loves or betray them both and become the catalyst for a bloody war.

Marisa has just lost her father and can’t seem to cope. After the funeral, she decides to go for a ride in the forest she was forbidden to go in. Rumours have always spread about people never coming back from there but all Marisa wanted was the calmness and solitude that the woods offered. However, she finds herself trapped in a storm and teleported in this new land called Carnelia. When she wakes, she is rescued by two men, Arrie and his cousin Darian. Arrie is jovial enough and sweet, he had also once been teleported to earth so he really gets what Marisa is going through. Darian on the other hand. is a soon to be king and has enemies everywhere.  He cannot afford to trust anyone because his slightest mistake will let his evil cousin, Savino, take the throne. Desperate to prove to Darian that she is not a spy, with no hope of going back home she is forced  to follow the two men to negotiate  a treaty. But when things don’t go as planned, Marisa has to accept that Carnelia is her new home, one she couldn’t possibly share with Darian at her side.

The Carnelian Legacy started out great for me! I instantly liked Marisa as a main character. She was strong and pretty funny at times. Arrie has got to be the sweetest character in the book! Don’t worry there is no love triangle! He’s more like her older brother. He knows what Marisa goes through and is always there to support her and help her through her harsh times. Darian-i got mixed feelings. At the beginning i liked the mysterious aura he maintained-always grumpy and liked to remain in solitude. As his armor cracks though we get a huge peek at the man inside who is totally sweet and mischievous! But somehow he didn’t make the yummy factor for me…but he is definitely too cute with Marisa!

I think the idea of time travel and the explanations were pretty complicated but very easy to comprehend. This book really held a lot of intrigue for me. I really liked the writing style too, it was very story-like and maintained the more modern language and shifted to a more formal one at the appropriate times.

I do think that this book was pretty long though…it started great and really interesting but about halfway through things really slowed down. The author tried to kick it up with some action but it all seemed like useless details…then at the last part of the book, things picked up again and focused more on the love story, which for me I saw no happy ending coming from it. That’s my other problem, the ending seemed waaaayy too convenient. I guess you could blame it on destiny and all but to what extent?

Overall, great plot and characters, I did enjoy the book despite some rocky moments 😛 I will definitely be following this author because her writing is just amazing!!