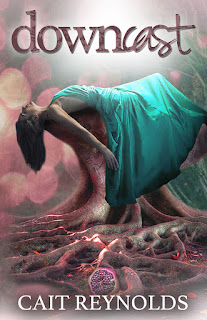 read my review of this AMAZING book here
About the book
What would you do when faced with an impossible truth? Written with heart and passion, Downcast by Cait Reynolds is ripe with twists you never saw coming and love that defies the odds in this intense new Paranormal Romance retelling one of mythology’s greatest love stories.It’s the start of Stephanie Starr’s senior year of high school, but sadly, this is no life of the prom queen. Stuck at the bottom of the high school social totem pole, Stephanie is forced by her domineering mother to wear lumpy linen dresses and eat organic tofu for lunch in a world of mini-skirts and pizza. What Stephanie doesn’t anticipate is gorgeous and cocky Haley Smith who breaks social convention and pursues her with a determination that is both terrifying and flattering. Afraid that Haley is simply trying to set her up for massive humiliation, Stephanie does her best to push him away. But the more attention he pays to her, the more she runs, and the more everyone else begins to notice.Instead of a loving family to support her as the mean girls make their play, Stephanie’s mother begins to unravel mentally, her possessiveness of Stephanie spiraling to new and frightening extremes. Stephanie is forced to grow up, find herself, and learn the truth about her past in order to save her mother, her friends, and her town. When the truth is revealed, nothing can prepare her for the outrageous reality of her existence…and nothing can save her from her fate.Except Haley.
About Cait Reynolds 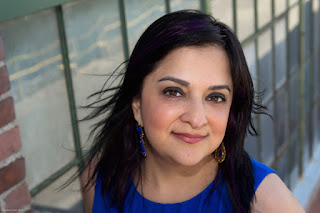 Cait Reynolds lives in Boston area with her husband and 4-legged fur child. She discovered her passion for writing early and has bugged her family and friends with it ever since. When she isn’t cooking delicious meals, running around the city, rock climbing like a boss, or enjoying the rooftop deck that brings her closer to the stars, she writes. Reynolds is able to pull from real life experiences such as her kidney transplant, and her writing reflects her passion for life from having to face the darkest  places and find the will to laugh.
Find Cait Online – http://caitreynolds.com/
On Twitter – https://twitter.com/caitreynolds
On Goodreads – https://www.goodreads.com/author/show/8441258.Cait_Reynolds
Purchase Links
Amazon – http://www.amazon.com/Downcast-Olympus-Falling-Cait-Reynolds/dp/1620159546/
Barnes & Noble – http://www.barnesandnoble.com/w/downcast-cait-reynolds/1121909253?ean=9781620159545
Guest Post – Getting into the Greek Groove: Cait’s Reading List
I can’t ever remember not loving Greek mythology.
I blame my mother. She would pick from the library children’s editions of mythology, Shakespeare, and other literature. When I didn’t want to go to school in the first grade because I was scared (I had to walk down a long hall to go for reading lessons with the big, scary third graders), she would read a few pages of “The Hobbit” to me as I had breakfast. Voices and all. Her Gollum is particularly amazing, just FYI.
My first introduction to Greek mythology was when Mom began reading Edith Hamilton’s classic, “Greek Mythology” to me. I remember vividly the stories of Theseus and Ariadne, Hero and Leander, and Hercules. I now know that my mom was careful and left out certain myths for tender young ears, such as Cronos and his children, Jason and Medea, and some choice others about children-eating.
Mom also guided me in learning about a subject from all different angles – history, literature, science, art, music, etc. This stood me in good stead when I went for my liberal arts degree and was trained in critical thinking and analysis.
As a result, I have amused myself over the years by devising mini courses of study and reading lists for myself that tackle a particular subject from many different authors and different genres.
So, when it comes to Ancient Greece, I have developed a reading list of books that I will go back to, over and over again.
1.    “Greek Mythology” by Edith Hamilton – This is where you need to start. Absolutely. No questions asked. Hamilton’s work has stood the test of time. She combines easy storytelling with actual quotes from the various original sources. She not only brings the myths to life, but she brings them close enough for us to touch, thousands of years later. Her book is setup to take you step-by-step from learning about the gods, through the Iliad and Odyssey, the heroic myths, the romantic myths, and even delving a bit into how the Romans co-opted the Greek gods for themselves.
2.    “Gods Behaving Badly” by Marie Philips – Now that you know the players and myths, it’s time to have some fun with them, and “Gods Behaving Badly” is just the book for that. The Olympians have fallen on hard times and are a bit in disrepair, living together in modern London. Nobody believes in them anymore, but they still have to do their job. It’s thankless thing to be a 21stcentury god. You will get all the inside jokes, and the story is quick, funny, and elegantly written.
3.    “Antigone” by Sohpocles and also by Jean Anouilh – That’s right. One play, done twice. Read the original “Antigone” by Sophocles and experience the power of a single choice for a woman in a society where there were no choices for women. Then, read “Antigone” by Jean Anouilh, a retelling of the myth written as a protest against collaboration with the Nazis in World War II. The message is still powerful, almost three thousand years later.
4.    “Goatsong” and “The Walled Orchard” by Tom Holt – I love Tom Holt. He is one funny guy, and he gets his research right, which makes the books even funnier. Follow the aspiring playwright Eupolis as he deals with trying to compete with Aristophanes, deal with his shrewish wife Phaedra, and avoid being killed in the Peloponnesian War. It’s like walking through classical Athens and saying hi to friends you’ve known for a while and laughing at their antics.
5.    “Courtesans and Fishcakes” by James Davidson – This is an academic book, and as such does contain bits of ponderous historiography which are of interest to people like me who like bits of ponderous historiography. However, this book gives us a fascinating glimpse into Athenian culture, and how it was driven by the experience of consumption rather than the endurance of acquisition. In other words, Athenians valued extravagant dinner parties and exquisite sex over the plodding (but boring) accumulation of family wealth over generations. Read this book for its descriptions of Athenian feasts, fights over the best fish in the marketplace, and the economy of sex. It’s delicious.
6.    “Olympiad” by Tom Holt – Yes, I know, Tom Holt again. But really, he nails it every single time he goes back to Ancient Greece. Only, this time, he goes way, way back – all the way back to the very first Olympics…or at least his retelling of it. We follow a motley crew of misfits as they travel around the peninsula trying to spread the word of a great athletic competition to be held by their king. Things, naturally, don’t go as planned, and the climax with the first Olympics is hilarious.
I’m hoping this summer to add one more book to my list: “Zeus is Dead” by Michael G. Munz. It sounds hilarious…possibly Tom Holt-level hilarious. Follow me on my blog to find out what I think of it!
Happy reading!