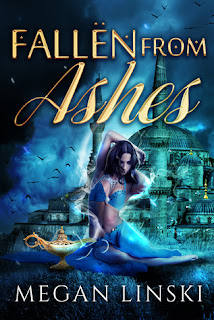 Queen Bennua has grown into a powerful ruler. With her new laws encouraging rights for both men and women, Haya-Maa has grown from a small city into a prosperous nation. Engaged to Zahid, the handsome Raider Prince, it would seem the young Queen is ready to lead the desert of Sahrahn into paradise. But not all are so eager to follow the new Queen. A short time into her rule Haya-Maa erupts into civil war, rebels opposing the idea of a woman in power. With no other option Bennua must embark on a quest to find her missing friend, Toshana, who could hold the key to ending the bloodshed. Yet as her journey wears on Bennua discovers her title as Queen powerless against the wrath of gods and the wars of men. At her breaking point, Bennua finds the only way to save her country and defend her people…is to offer a devastating sacrifice.

We left Bennua in book 1 as she plans to enact her rule and offer a bright new dawn for her country. She has fallen into a routine and despite the rebels that oppose her rule, she stands firm and has Zahid at her side to support her. As her wedding to the man she loves draws closer. a new enemy rises from another land and becomes the face of the rebels opposing Bennua’s rule. Except this rebel is linked to Zahid in a way she could never have imagined and he is a bigger threat than Bennua ever anticipated to face. She and Zahid will journey to find their lost friend , Toshana who might be the key to peace but along the way they meet a strange young man but for some reason Zahid doesn’t trust him like Bennua does…could it be more than jealousy? Will the new rulers come back in time to save their kingdom?

Once again, entering this amazing new world of Sahrahn has left me breathless! Let’s talk about our queen! In book 1 she was a lovely and warrior-like princess. In this book? SHE IS A MONARCH!!!  She has matured so much and yet she still has that touch of innocence that i loved in Book 1! her dedication to her country was extremely touching and her selflessness exemplary. She has to make the ultimate sacrifice for the greater good and cannot help but be so proud of her! That’s not to say that she is without faults-like the rest of us she is a mere mortal..or is she? Hints in this book have left me a little suspicious..

Plot wise-as usual short, intriguing, gripping and AWESOME!! This book definitely took a turn for the better because this time, the author surprised me by incorporating the supernatural!! A hilarious Djinn, monsters, floating islands and two GODS!!

I loved that her relationship with Zahid was put to the test, it really added more depth to the two because they were able to surmount a lot of stuff….There was one moment about 87% through, I FELT MY HEART STOP!!! I never EVER thought this would happen and i could feel my heart breaking!! I won’t spoil but-OH MY GOD!!! i cannot wait  to see how book 3 will be!

Set in a new magical dessert, a queen while fight for her kingdom and for her love, But will it be enough?