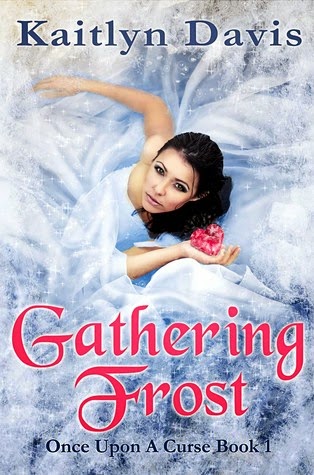 Will his kiss be enough to revive her frozen heart?

Once Upon A Time meets La Femme Nikita in GATHERING FROST, a dystopian romance from bestselling author Kaitlyn Davis that reimagines the classic fairy tale of Sleeping Beauty.
Jade was only a little girl when the earthquake struck. Before her eyes, half of New York City disappeared, replaced by a village that seemed torn out of a storybook. Horses and carriages. Cobblestone streets. A towering castle. And, above all, a queen with the magical ability to strip emotions away.
Ten years later and Jade has forgotten what it is to feel, to care…even to love. Working as a member of the queen’s guard, she spends most of her time on the city wall staring at the crumbling skyscrapers of old New York. But everything changes when the queen’s runaway son, Prince Asher, returns. Jade is tasked with an unusual mission–to let the Prince capture her, to make him trust her, and then to betray his secrets to the crown. In return, she’ll earn her freedom. But life outside the queen’s realm is more than Jade bargained for. Under Asher’s relentless taunts, her blood begins to boil. Under his piercing gaze, her heart begins to flutter. And the more her icy soul begins to thaw, the more Jade comes to question everything she’s ever known–and, more importantly, whose side she’s really on.

I was drawn to this book as soon as i saw the summary! I mean come on, a rebel prince!? how could i pass that up!? Needless to say the end of the prologue really drew me in!

“And I wish I could say I was the hero of the story. A resister. A rebel. Someone who lived to bring an end to the queen who stole my childhood – my mother, my life, my very world.
But I’m not.
I’m not the good guy.
I’m the one who puts the good guys in their graves.”

Jade is definitely strong character, physically. She can beat any men in her patrol team but even though she fought well and all, i would not call her a ‘kickass’ character. Yeah she’s physically strong but somehow i didn’t find her mentally strong like Katniss or Rose (VA). I understand her inner turmoil though and i found it fascinating how she dealt with Asher, i was always wondering if she was finally going to tell him!

The background and story was super unique and well written. I loved the mixture of medieval/modern world. It was a beautifully written tale with a modern twist! The curse aspect was cool and the evil queen was superbly interpreted. I did not see the twists and i frankly did not see how they were going to get out of their situation! But the author handled it amazingly!

I think my only objection would be that i don’t think its a retelling of sleeping beauty at all. But then i actually kind of see past that because here, Jade isn’t asleep. She’s in an emotionless frozen state and by falling in love with her, Asher delivers her from her slumber of the unknown and into the reality of feelings. But i think it’s a mix between sleeping beauty and the ice queen.

I loved the romance between the two! Asher was just frustrating enough to arise emotion in Jade. He was a selfless and good price, dedicated to his people no matter what happened to him.

It was however a quick but lovely and unique retelling! I cannot wait to read the rest of this series!!