Hey everyone!!!! Yes i am alive!!! Sorry for not posting for a while but i have mocks coming up in about a month and these will be my last exams before A levels so i had TONS of work to do!!!
So i will be posting a review hopefully tomorrow and i’ve got a few things lined up!

But for today i just wanted to say that though my desk is an avalanche of maths and literature and chemistry-I HAVE NOT AND WILL NOT STOP READING MUAHAHAHAHA!!!

I messed up big time in my O level mocks two years ago because i’d been obsessed with my ereader and could absolutely not put it down! This year is the same..except i’m being more responsible *coughs* and studying a lot! Seriously! I even did some chem in my every day life-i susbtituted some sleeping time for reading time and car rids are book time!! so is waiting-for-my-mom-while-she-shops time 😂

I was so determined to put aside books for this term but what books broke apart my resolution and shattered my will? Pfft. I htink you guys know these books and have read them and will probably be scoffing at me because i’m just now joining this fandom…and the culprit is…

I have spent the last month buying the whole collection of Heroes of Olympus, Percy Jackson, the Kane  Chronicles, Magnus Chase, the novellas, AND I PREORDERED THE SIGNED DELUX LIMITED EDITION OF TRIALS OF APOLLO 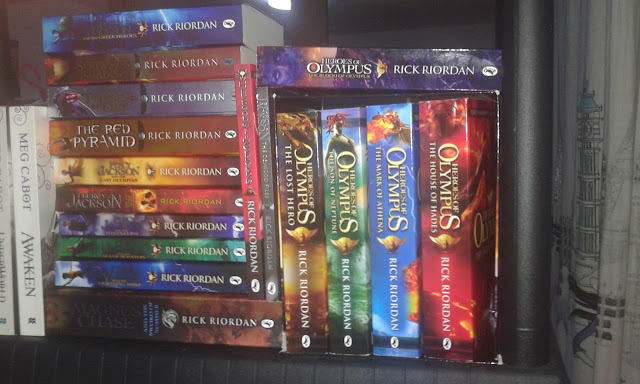 Some facts about the pic:
-I have a gorgeous box set of Heroes of Olympus (thanks grandma!!) but for some reason The Blood Of Olympus doesn’t fit in anymore that’s why it’s on top, i’ll figure out a way to make it fit again..
-Book four of the Percy Jackson series does not match the other covers cause they had no other copies and i was forced to get that one!!
-i am planning where i will fir Trials of Apollo when it arrives! (p.s that’s my mythology shelf!!!)
-I also bought Percy Jackson and the Greek Heroes, i’m waiting for them to get the Greek Gods in paperback!
-I am binge reading this WHOLE collection and i’m currently on The Red Pyramid. Once i’m done with the Kane chronicles and the novella, it’s on to Magnus Chase!

Rick Riordan is a GENIUS! His writing is action packed, funny and omg the feels!!! I’m sure i don’t need to be telling you guys sicne you’ve probably read it already but if you haven’t go read it!!! DO NOT BE LIKE ME AND UNDERESTIMATE A TWELVE YEAR OLD!!!Percy is witty, hilarious and adorable you won’t  even think he’s twelve!!! It’s filled with mythology and twists and omg the CLIFFHANGERS. The cliffhanger in Mark of Athena!. Ha. Ha. Ha, Very funny Mr. Riordan. Our emotions are just not that improtant to you are they? I am so sorry for the guys who read Mark of Athena and House of Hades wasn’t out yet! Thank god i started this series after it was ccompleted!

This is his dedication in House of Hades:

However i was a teeny tiny bit dissapointed with Blood of Olympus…But i still loved it! I’m ok with the Kane  chronicles but i don’t LOVE it as much as Percy Jackson. well mostly because of the lack of Percy…

I also just got my copy of Lady Midnight by Cassandra Clare and i ordered A Court Of Mist And Fury by Sarah J Mass because people are telling me it’s AWESOME..and well I NEED IT BAD.

So yeah we’ll see how to fit all that in with mocks,WHY why why do all these books have to come out this year??I guesss that says i have no self restraint when it comes to books but i’m a YA bookaholic and proud to be!!!