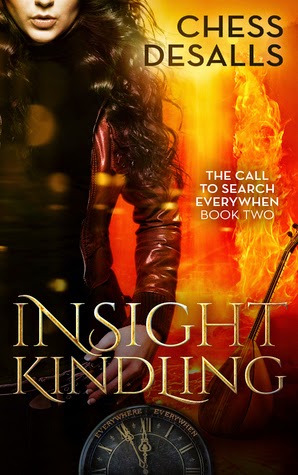 Calla faces charges against her for changing the past. Her use of the Travel Glasses resulted in the creation of two writings that affected the lives of Edgar, the inventor of the Travel Glasses, and Valcas, their prior owner. Now Calla must explain her actions before the Time and Space Travel Agency.The hearing does not end well. The travel commissioner finds Calla guilty as charged and forces her to choose between two harsh penalties. Despite the risk of becoming lost herself, Calla accepts a dangerous travel mission that may help her find her father. She teams up with a group of talented travelers. While working with them, she soon discovers that she has a special travel talent of her own.Pursued by the sentient being of white light that’s been tracking her father’s bloodline, Calla fears her newfound talents may not be enough to protect her and her teammates before they complete their mission.Insight Kindling is the second installment in The Call to Search Everywhen serial series.

If you’ve read my review of book 1, you probably know I didn’t really like Calla..i’m happy to say i don’t have that problem anymore!

Calla really won me over in this book, i don’t know if it’s the transformation of her character itself or that she just seemed more brave. So the last book ended when Valcas was taking Calla to the TSTA for breaking some rules and she now has to face her judgement. She has to pay a huge fine or help Valcas in finding a lost person. Lost people are those who get lost while time travelling, And it just so happens to be that the person Calla has to look for is her very own father! But Calla knows it’s too much of a coincidence especially when Valcas seems happy about her going on this mission. Valcas’ true intentions are revealed and we find out exactly why he did those things in book 1. I have to admit, he is a kind of devious genius!

The mystery of the white light that’s been targeting Calla is finally revealed. It’s called an uproar and it feeds off the energy of some ‘talented’ travellers. Calla, Valcas and her two new companions, Ivory and Ray journey together to find her father with the Uproar hot on their heels. We unravel more and more of Valcas’ past which seemed to be OVERFLOWING with secrets.

I get that the first book focused more on the world building but this one was just pure thrilling adventure! There was still more intriguing stuff we learned but i just loved the journey they had to go through and everything just came together perfectly. And get this-there’s a waterfall of fire they have to cross to get to  the cave behind it! A FIRE WATERFALL!!! And then the author went on to put the layers in the waterfall. so the first is fire-ergo you get burnt, the second is a soothing balm and the third is water! These layers are used to make sure you get to the cave without looking like a barbecued sausage. But how do they get out if there is no soothing balm and water layer in front of the fire? See, to go out they have to go in reverse-water first, balm and then fire-but how are they NOT gonna ended up like a barbecued sausage!? I just LOVED that idea- it really amazed me!

The epilogue really left me breathless. I really can’t figure Valcas out, what else could he possibly be hiding? But hiss will probably be his biggest secret to date…and we have to wait till book 3 to find out what it was…*curls up in a corner and prays for book 3 to come out faster*

The second book in this thrilling story is full of adventure and romance with a plot that will definitely keep you hooked till the very end! Cannot wait till the third book! My favorite part is definitely the waterfall though if you hand’t guessed from my rambling :P!