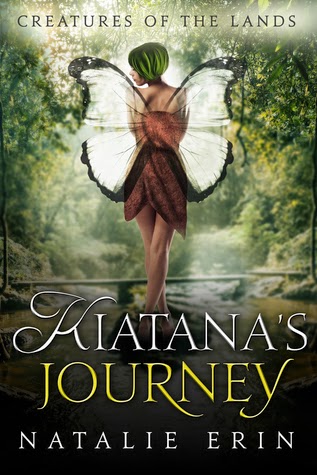 Dragons fly, animals can speak and fairies rule over all in the realm they call the Lands, a place that is both beautiful and dangerous. Only one myth remains…Changers, beasts who can morph into any creature at will, and their Accompanies, the mysterious riders who command them. Chaos begins when a Changer called Ionan and his Accompany Keota crash down from the sky. They are found by two orphan wolf pups searching for their mother, and the fairy Kiatana, owner of the Verinian Forest. Kiatana refuses to trust the handsome stranger, or believe the story about his troubled past, but she soon finds she has bigger problems as a plague begins to spread throughout her land, killing all in sight. With no option Kiatana heads out on a quest with Keota, Ionan, the two wolves and her trusty pegasus to find a cure before the forest is destroyed forever. But danger has a way of finding her, and Kiatana isn’t sure if she’ll survive the road ahead…

Kiatana rules over her land in peace and harmony. That all changes when a deadly plague starts attacking her animals and the cure is with the unicorns. Keota is an Accompany and his Changer Ionan (he can change into any animal) find themselves in Kia’s land in search of an adventure. Kia decides to leave her forest and go in search of the cure along with Ionan, Keota, her pegasus and two wolf cubs who managed to sneak their way into the quest. Her journey is full of danger and unique creatures. And it all ends in a battle to save the land.

This was a fast paced, light hearted read for any of you looking for an adventure! All the characters were super unique. Kia was a headstrong big mouthed character whose sense of bravery was extremely high. Keota was stupid, sweet and an innocent character. Ionan was a wise, jealous but loyal friend. I think my favorite characters were the cubs; Lilja and Lottie. They lost their mother and pack when they were young and now lived in Kia’s lands. They were so innocent but full of bravery and love for each other! I think they were the sweetest aspect of the whole book!

It is a kind of dystopian book after all the humans were wiped out from a plague. This is the same plague that is attacking the forests. The settings were always imaginative and very fairytale like! I think you could make a movie like frozen out of this! There were loads of different creatures; dragons, wolves, shifters, faeries, pegasi, unicorns and loads of other stuff!

The only thing i would say i didn’t feel giddy about in this book was the beginning of the romance. I just didn’t know why they loved each other, it just like sprang out of nowhere…but overlooking that, the rest of the romance was adorable!

I really LOVED the last two chapters and the epilogue. I was smiling all along especially the parts between Keota and Kia! I know the second book will be another adventure because the epilogue definitely points at another HUGE threat on Kia’s forest!