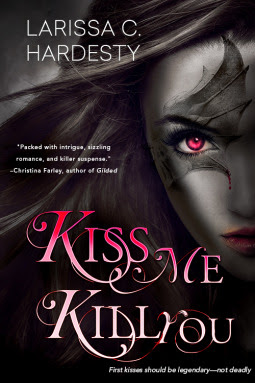 First kisses should be legendary—not deadly.
Emmy Duivel believes in true love: heart-stopping kisses, candlelight dinners, and a connection that lasts forever. But not the kind of kisses that land your date in the hospital. Emmy always knew she was different, but not in the supernatural sense. Not in the succubus sense.
Paul Andinn had only one job: watch over Emmy and make sure she doesn’t expose the supernatural world. It should have been easy, but the moment he looked away, she kissed that boy, and everything changed.
He should be more upset. But he can’t. Not when he’s falling hard for her.

Emmy has had a crush on her class partner, Paul, forever. But unlike her best friend and mother who live by the no serious relationship rule and mess around with guys, Emmy wants love just like the ones in her novels. But after she gathers up her courage and asks Paul out, she’s heartbroken when he rejects her. And suddenly, guys are starting to pay attention to her so when the most popular guy in school asks her out, there’s no way she’ll say no especially after being rejected by Paul. After making her date unconscious after her first kiss, Emmy is in for a surprise when she learns of her true heritage.
Paul on the other hand, works for the Powers. His mission is to make sure Emmy doesn’t expose their existence and as an Incubi, he can’t be in relationships either. He wanted more than anything to accept Emmy’s offer but with The Powers breathing down his neck and controlling his every move he couldn’t put her at risk. Not after he’d paid the price for a similar mistake before.
The plot and idea were really original but personally I think that the supernatural aspect of the book should have been more developed. I needed much more info on the world of the succubi and incubi, we were given some insights here and there but I really wanted more. I have to say thought, the author wrote some amazing love scenes!!!
I really liked Emmy. For a fifteen year old, she was incredibly mature. She talks to herself A LOT. She’s the typical awkward, clumsy and shy teenager and comes off as super naive and sweet-we’ll get to her character development later. I liked Paul at the beginning but as the story progressed he kind of lost me when he started getting all sappy and lovey dove.
What could have been an amazing romance turned out a little whiny for me. At first it was excellent! You had both these characters that had feelings for each other but Emmy still had that innocent high school crush aspect going on. And as it developed, the romance got super sweet! But then at some point it just got a little too…sweet? And the characters turned sappy and suddenly badass Paul turned into this :  “I love her but maybe she doesn’t love me. Do you love me Emmy? I told you I loved you but you didn’t say it back. So do ya?”

And then Emmy who at the beginning was feeling insecure about herself and was always like “Does he like me? Oh he likes me! I want to kiss him. He’s gonna kiss me. OMG why would he want to kiss me. Oh he stopped kissing me. I knew it, I knew he didn’t want to kiss me. Okay we’re making out in the library now while we’re supposed to be doing a school project. OMG now he said he only wanted to give me a ‘quick kiss’ and I imposed a full on make out session. He didn’t want this, I’m too much.”  But she grew out of it which I am so thankful for!!!! Great character development! But it’s like she transferred a little of her sappiness onto Paul 😀 !

Overall a nice read with a unique concept!