Skip to Content
Home / ARCs from authors / MEGAN LINSKI AUTHOR INTERVIEW
And as promised yesterday. here is the author interview 😛 !! 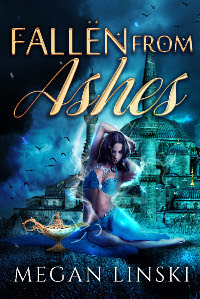 Here is an interview with Megan Linski, author of the new fantasy romance novel, Fallen From Ashes
Describe your story.
Fallen From Ashes is a mixture of Aladdin and 1001 Arabian Nights, with themes such as equality for women and staying faithful to your true love, no matter what the cost.
What inspired you to write Fallen From Ashes?
Fallen From Ashes is the sequel to Kingdom From Ashes, #1 in the Kingdom Saga. When Kingdom from Ashes came out, I got such a high demand for a sequel that I knew I had to get right on making another story in The Kingdom Saga for my readers to explore.
What makes a story great, in your eyes?
I believe you have to have something different in your book that’s unique to you, and you have to stand for something. The books that mean the most and create the most change in the world aren’t afraid of making a statement and not pleasing people. They’re not afraid to be bold, and I try to do the same thing in my writing.
Where do you live? Did your hometown influence your story?
My hometown is pretty small and boring, so to create the exotic, adventurous desert of Sahrahn (where The Kingdom Saga is set) became an escape for my readers and for me.
How long did it take to write Fallen From Ashes?
Kingdom From Ashes took nearly three years from start to finish. By drastic contrast, I wrote Fallen from Ashesin ten days and took a month to edit and revise.
Who is your cover artist and editor?
I have two editors: Sam McClure from Resolution Edits, and Thalia Smithingell, who works for me under my company, Gryfyn Publishing. My cover artist is the amazing Clarissa Yeo of Yocla Designs.
What have you learned while writing and publishing?
Before I started I thought I had a great plan and knew everything about marketing, but it turns out I didn’t know anything. Things that I’ve really worked hard on haven’t really panned out, and other things that I’ve ignored have ended up exploding my book’s visibility on Amazon. This is why it’s important to read marketing books and know how to get your product out there. A good one to start with is Write. Publish. Repeat.
What helped you when you got discouraged along the way?
When readers asked for a sequel to Kingdom From Ashes, I had absolutely nothing. No plot, no outline, not even an idea of where I wanted to go. I sat down and didn’t let myself get up until I had an outline. The Kingdom Saga requires a lot of research, because it takes place in an ancient Arabic society, so I did that as I went along and made sure to stick as close to Middle Eastern folklore as possible. I just had a fire lit underneath me, and I didn’t let myself stop. Now that I’m working on #3, that fire is gone and it’s a lot harder to keep writing, but I’m forcing myself through it and not allowing myself to quit, which makes all the difference in the world. When you stop making excuses and start expecting results of yourself, magic happens.
What would you do differently on the next book?
I would treat myself better! My work ethic when it comes to writing is absolutely crazy. It’s not uncommon for me to be icing my hands and wrapping my wrists late at night after I’m done writing. With Fallen, it took only ten days to write, and I didn’t plan it that way. I simply went crazy and wrote as much as I could. I personally think it’s one of the best books I’ve ever written, but when I was finished I was shaking and on the verge of vomiting. I really need to take better care of my temple, otherwise I won’t be able to produce!
Best piece of advice for first time writers?
Stop making excuses and do what you want to do! You’re wasting time and money waiting for the right time or the right opportunity to go ahead and do something. You can always fix mistakes later, but if you wait too long, you’ll miss your chance. One of my biggest mistakes was not publishing in 2011 like I wanted to during the indie boom and waiting until 2014. I lost precious time and sales because I was waiting around until things were perfectly in place, until I accepted the fact they never were going to be.
Before you publish, though, go ahead and read every single book on writing and marketing that you can. You need to accumulate as much knowledge as possible before you go into publishing. The more you know, the less difficult things will be later.
Another thing: successful people network and know a lot of other people! You may complain that it’s not fair and your career shouldn’t be like high school, but the more popular you are and the more friends (READERS) you have, the more successful you will be. Most authors are natural introverts, and I am definitely not the most social person, but if your book really means the world to you then you will find a way to get yourself out there and make some acquaintances. It may seem unfair, but nobody is going to find you if you’re underneath a rock. Posting your book everywhere, paying for lots of advertisements and spamming people doesn’t work. Making connections and lasting friendships does.
Where can readers find you?
www.meganlinski.com, and you can sign up for my VIP list here!
What are you planning to publish next?
I’m currently working on Redemption From Ashes, #3 in The Kingdom Saga!
You can find Fallen From Ashes here! :
http://www.amazon.com/Fallen-Ashes-Kingdom-Saga-Book-ebook/dp/B014TZ1AVO/ref=sr_1_1?ie=UTF8&qid=1443464228&sr=8-1&keywords=fallen+from+ashes

LEGEND OF ME BLOG TOUR