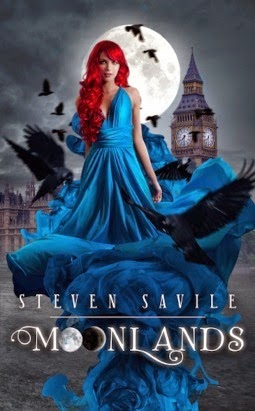 Goodreads Synopsis
Fifteen-year-old Ashley has a complicated life. There’s no doubt her overachieving parents love her, but they are wrapped up in their own worlds for so much of the time it leaves her feeling like she’s alone.

Like a lot of teenagers, Ashley dreams of other worlds, but unlike a lot of teenagers her world is about to collapse as rifts to an ancient Fae Kingdom begin to open all around her. With the arrival of of a supernatural hit-squad intent on killing her, and an unexpected inheritance, Ashley’s London is about to become a magical and mysterious warzone where the prize is Ashley herself.

Ashley has to find out the secrets of her own life before she is killed. Balancing ancient prophecies, schoolwork and the love of her life is difficult to say the least! Take part of the wonderful world of Moonlands.

Blackwater Blaze is a wolfen. He and his pack are sent to the human world by Redhard Jax to kill the dead queen Tanaquill’s heir since she can take the throne of the current king. But now his pack is dead and he is the only one left to kill the girl and he starts to wonder if Redhart Jax had purposely sent him there, knowing that his pack would be killed…Ashley has never felt like she belonged so when her aunt leaves her a weird book, goggles and an umbrella, Ashley is more than confused, after that she sees a teacher being eaten up by a wolfen. Blckwater Blaze is after the girl but with so many protectors he can’t get to her but when she is attacked by something else, Blackwater Blaze has no doubt he’s been betrayed by Redhart Jax. So together they journey to the Moonlands to find and destroy the king.

Pretty good book but i did find myself skipping through most of the stuff. I felt nothing for Ashley or Blaze in particular.. The plot was awesome but a teeny bit too simple. That’s pretty much it for the negatives.

The fact that the whole world functions on moons was enough to intrigue me. The world building is vivid and entrancing and so beautifully described you actually feel like you’re in another world. Ashley’s bravery to save her world was pretty cool but i think what i liked the most was the ending. A pretty good cliffhanger!

Just a quick thin-i LOVE THOSE NAMES! Redhart Jaz, Blackwater Blaze and Ashkillion! Man i wish people in our world were named like that!

Savile is definitely making his way up the YA ranks!