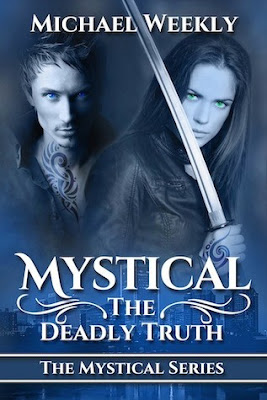 Mystical (Mystical, #1)
by Michael Weekly
Release Date: 12/08/15
Limitless Publishing
240 pages
Summary from Goodreads:
When Eliza Rose found out she was a witch, she thought she’d be casting spells…
However, it turns out Eliza is on her way to becoming a mystical assassin. But first she has to start college with her best friend Dawn Roberts and her feline familiar Jared. If you think college is stressful, try finding your best friend being seduced—nearly to death—by a venomous fairy. Something is horribly wrong, and Eliza must find out what it is.

Murderous mermaids, seductive fairies, and manipulative elves are terrifying enough, but pure witches can become corrupt…and they’re the most dangerous creatures of all. Eliza struggles to discover the source of this chaos, but is repeatedly attacked—and saved by a shadowy figure. On a very personal note, Eliza must learn whether corruption is beginning to claim her mother.

Her strongest ally might be handsome, enigmatic Donovan—but he is hiding a shocking secret…

Donovan wants nothing to do with his old gang—not after the things they’d made him do. But when he meets Eliza, he’s both frustrated by her amateur skills and impressed by her emerging strength, and he feels compelled to help her grow into the assassin she’s meant to be.

Every answer has a price, and there are beings born to corrupt the pure.

Eliza fights to master her skills before it’s too late, while Donovan must determine whether Eliza can be saved…or if she must die to keep her out of the hands of those who would use her powers to reign over all of Mystical.

Michael believes he is a mad scientist experimenting with his own imagination. He enjoys world building and having alluring conversations with his stubborn characters.
He is your author of The Mystical Trilogy, Casso and TESTED. Specializing in many genres such as Fantasy, Urban Fiction, Dystopian, Young and New Adult. Most of his inspirations come from fairy-tales, music, and his curious what ifs.
You can find him anywhere to snuggling in a comfy seat with hot cocoa Netflix binging, or taking a soothing walk along the forest lines. Possibly diving in a tank with sharks, but that would be too insane.
He is a shopaholic east coaster living in Virginia with his fury companion Coco.
Where the two live happily ever after.
Author Links:

Interview
What inspired the premise for your story? I enjoy fairies, witches, elves, mermaids, any other magical creature. However, in most cases, one magical creature is looked down upon sometimes. This is the witch. They’re made to be these long nosed, ugly pimpled women who boil up deadly potions in their cauldrons. You get the point, they’re not as beautiful and pretty as the other creatures. So, I flipped it. I have a witch who is born and trained to kill mermaids, fairies, elves and any other creature. I thought it would be cool to flip the switch and have a witch be the hero of the story instead.
Why is the setting to your story so important? I wanted my story to be in the city, because it’s different and cool to me. To have mystical creatures disguised as humans going to college or at parties is pretty rad.
Did you always want to be a writer? If not what did you want to be? Initially I wanted to work in Public Relations and to be a Publicist under entertainment, print and media. If writing happens to become anything bigger I’ll be more than happy to come up with more stories to tell!
When did you first consider yourself a “writer”? Joining Wattpad, a reading/writing, site made it very clear that I could do this writing thing pretty well. I had little fans waiting for my stories to update because they were so interested in finishing it. When you have people who invest that amount of time in your work, your books it means something. I officially labeled myself as an author after two years on Wattpad.
How long did it take to get your first book published? I did not plan on publishing Mystical at all. I had a clear plan to just keep it on Wattpad. An agent reached out to me on the site and asked me to send her my manuscript and then I decided to start pitching to agents. Of course you’re going to get rejected, but it made me change my mind and so it took me about 5 months after I was completely done with my sequel in the series. I landed a traditional publishing deal.
What were your aspirations as an author and have any of them come true? Well, one of them was getting published and that came true! Another was working with a professional editor and that’s come true as well. I’m a pretty happy camper!
What have you learned about the publishing industry since you’ve signed that first contract? That an author has no say in what they want done with the book. The editing is pretty much your only say, the cover and everything else marketing wise that’s completely up to your publisher!
Now that you have a feel for the publishing world, would you do anything different if you had to do it all over again? I would do a bit more research with who I’d like to do business with. I would be much more detailed with what I want for my book and maybe think once or twice about being agented or just being traditionally published.
What genres do you normally write in? I absolutely love Fantasy, Urban Fantasy and Dystopian. It’s when I feel most limitless.
Is there a genre you haven’t written in that one day you’d like to tackle? Romance

What was the craziest thing you’ve ever done when it came to a storyline in your book? Cut a complete chapter out and rewrite it! It was scary, it was brutal, and it will never happen again!