Goodreads
Emmett Atwater isn’t just leaving Detroit; he’s leaving Earth. Why the Babel Corporation recruited him is a mystery, but the number of zeroes on their contract has him boarding their lightship and hoping to return to Earth with enough money to take care of his family.
Forever.
Before long, Emmett discovers that he is one of ten recruits, all of whom have troubled pasts and are a long way from home. Now each recruit must earn the right to travel down to the planet of Eden–a planet that Babel has kept hidden–where they will mine a substance called Nyxia that has quietly become the most valuable material in the universe.
But Babel’s ship is full of secrets. And Emmett will face the ultimate choice: win the fortune at any cost, or find a way to fight that won’t forever compromise what it means to be human.

“If they push you to the very edge, what do you do?”
“Fly.”
The synopsis is pretty self explanatory, you have a group of ten kids from all around the world in desperate need of money that get recruited by a company called Babel. Babel wants its recruits trained to perfection before sending them down to the planet of Eden to mine a substance called Nyxia which can be manipulated into almost anything. But Nyxia isn’t just a substance, it seems to have a mind of its own at times and the recruits will have to train mentally, emotionally and physically to survive Eden but here’s what Babel didn’t tell them-only the top 8 out of the 10 get to go to Eden(hello Divergent) and continue to benefit from the money being sent to their families. Friendships are hard to come by when you’re competing against each other and yet the ten forge bonds but who will make it to Eden? And what exactly is Babel hiding?
Think Hunger games meets divergent in SPACE FOLKS!! For some reason I’m really getting into sci-fi these days and this book did not disappoint!
One of the things that made this spacial journey so enjoyable was the incredible characters! Each of the ten were incredibly unique with their highs and lows. The author did a great job in the sense that he not only put in a lot of effort in the setting and the plot (because there isn’t much world building you can do on a spaceship) but also in every single one of these characters because if the characters were flat, not even the plot could have saved this book!
“So they chose us because we’re broken, not because we’re poor,” she says.
“What’s the difference?”
Kaya smiles now. “The pieces of broken people can be put back any which way. If we were just poor, they’d have to break us first, to make us into what they want.”
The most refreshing thing about this book was the diversity! And I don’t mean one POC protagonist and the book is labelled as diverse. As mentioned above, we get people from all around the world and the author does a great job at bringing them together because when you think about it, the only thing dividing them would be a language barrier but the recruits have some kind of mouth mask which automatically translates what, let’s say a Japanese kid is saying, into English for our protagonist to understand!
Emmet-the protagonist-was awesome! Kaya was the wise owl from Japan, she reminds me a lot of Annabeth Chase from PJO and she came up with the best tactics and plans. Bilal omg I just want to wrap him up in a blanket and never let him go, he is too good for this world! He was so sweet and gentle and ugh just oozing with sweetness and goodness!!!!  I made this edit below because for some reason I was associating each character with an animal when I was reading :3 Jaime was giving off lone wolf vibes and Azima was just one badass fighter-almost majestic! 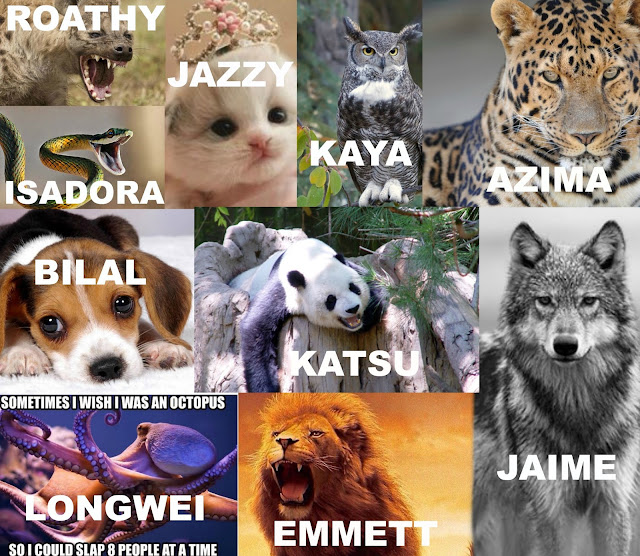 I really loved reading the book from Emmet’s POV because I rarely read books with a male protagonist-no clue why-but this one was great! He really struggles with trying to keep the Nyxia from kind of controlling him but his determination to make it to the top eight was relentless and honestly kind of inspiring. He was so resilient and and it felt like he was literally burning with power and motivation at times. The author did such an amazing job with knowing when to make Emmett reinforce his motivations and when to make him feel defeated without overdoing it! I’ll go as far as to say that Emmett was a flawlessly written character because he was not a perfect character. Despite the tough front he put up most of the time he was really vulnerable and he has a lot of stuff in his past, maybe some stuff we don’t know yet ( as do all the others to be honest) but he doesn’t let it dictate his future. And his love for his family was just beautiful! Other than that, he was quite perceptive an analytical. When you think about it, all the other characters had the same struggle of trying to get to the top 8 while keeping their humanity intact. They were all helpless and they needed that money Babel was offering them for their families.


The concept of Babel itself was super fishy. They had never before seen tech and everything; they seemed so perfect you just knew they had to be hiding something. Again here Emmett, like Roathy and Kaya, isn’t that easily fooled and he doesn’t trust easily so he’s always on the look out for anything fishy about Babel. There was a hefty amount of suspense in the book and then at around 70% in the book, Babel pulled some serious crap! I’m not gonna say what it is but just when you think things are settling down, you’re relaunched into the urgency!


“The brighter the colours, the more likely something dark is hiding underneath.”

That leads us to the non stop action because the stakes are always high, one tiny mistake and you can drop to the bottom of the scoreboard and never find your way up again. At some point, all the characters especially Emmett, were letting the scoreboard consume them completely and it was always at the back of my mind throughout the chapters; I was literally getting antsy until they listed the scores again.
There was a romance that started to bloom at round 80% in the book but to be honest I didn’t really feel a connection between the two characters so I don’t really know how that’s gonna go in book 2. In fact it came a little out of nowhere and it wouldn’t have bothered me if it hadn’t happened at all.

Despite all the tension we do have some full on hilarious moments especially with the jokester Katsu! I literally spent a few minutes full on laughing at his jokes sometimes 😛
“Aren’t you supposed to be on the front of the boat(…)They typically carve grotesques onto the prow. How’d you break free?”

Not an earth shattering cliffhanger but still a great way to end a first book in the series, I cannot wait to get my hands on book 2 and hang out with all those amazing characters-if they made it *dah dah dummm*
READ IT GUYS. I’m telling you guys right now, THIS NEEDS TO BE MADE INTO A MOVIE BECAUSE IT’S GONNA BE EXPLOSIVE. I DEMAND THIS RIGHT NOW.