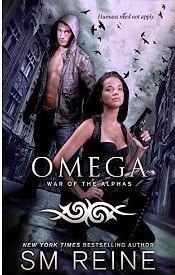 Ten years ago, Deirdre Tombs died. When she was reborn the next day, Deirdre had become a shapeshifter who can’t shift shapes. Nobody knows what animal she’s supposed to be. She’s definitely not a werewolf. The Alpha, Rylie Gresham, can’t force her to transform like other members of her pack.Now Deirdre is considered an omega, the weakest shapeshifter in the pack–a vulnerable position when Everton Stark demands tribute from Rylie. He wants to be the dominant Alpha. The only Alpha. And he plans to make her pack submit whether they want to or not. Stark can make every shapeshifter obey him by force of will alone.Every shapeshifter except Deirdre.The shifter who can’t shift is the only hope for Rylie to win the war against Stark. It will take everything Deirdre has to survive undercover in his den. But can an omega’s will be stronger than that of a charismatic, deadly Alpha like Everton Stark?

When Deidre was a kid, darkness-demons covered the planet and everyone died. And they revived but with the ability to shift into animals. Deidre however has come back but she can’t shift into any animal. Rylie is an alpha and lives in the sanctuary with her pack but the problem is, only a few are allowed into the safety of the sanctuary. As a kid, Deidre, wasn’t awarded such privileges. Due to her inability to change into an animal, she has been shuffled from home to home until she earned enough money to get her own apartment with her roommate. Then there’s Everton Stark. His hatred for Rylie burns just as bright as Deidre’s..the difference? He does something about it. He starts to build a rebel group and plans to take down Rylie. Everything is set into motion when she is attacked by her demon boss and Rylie brings her to the sanctuary and asks her to go undercover and join Everton Stark-all the while reporting to her. The reason? She cannot be compelled by Stark like the others because she can’t shift.

Deidre was one kick ass heroine! Her hatred for Rylie was justified and i couldn’t help but despise her a little because she was using Deidre. For her, Deidre was just a means to protect herself and sometimes i was irked by her ‘i’m a good and sweet alpha’ persona,

There was loads of action as she got more involved into the rebellion and i could actually feel her indecision. She was torn between fighting with Stark-they both had the same reasons to fight-and keeping her promise to Rylie. Stark is a butt! I’m sorry but i really do not get him. But he’s totally badass and it’s supposed to fit his character so yeah-at times he seemed like an emotionless evil bastard and at times he would get so passionate about what he was fighting for. Point is, i felt no connection between him and Deidre but i think that will seriously change in the next book!

You get swept into the opposing sides really quickly and even though i don’t like how Stark is handling the situation, i agree with his motives behind his actions-not his actions though.  He believes that everyone should be given equal rights and safety and not prioritized like Rylie’s pack. To me, she basically started a discrimination between the shifters even if that wasn’t her intention,.

I did love the love aspect in this book between Deidre and Gage! I could not believe the ending! Super interesting idea and great world building!