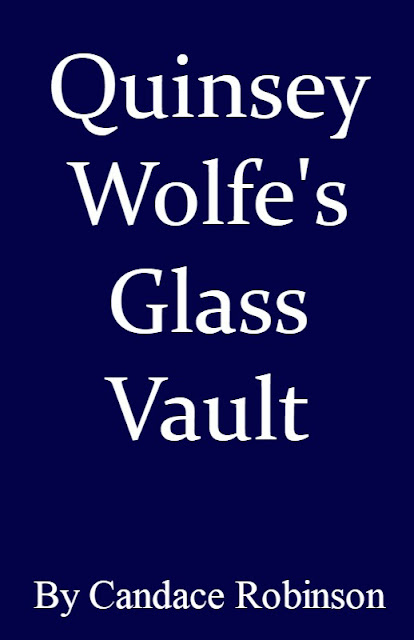 *sorry guys the cover hasn’t been released yet but i did see it and it’s GORGEOUS!!!*

Some see it… Some don’t…
People in the town of Deer Park, Texas are vanishing. There is a strange museum, known as Quinsey Wolfe’s Glass Vault, that appears overnight. Perrie Madeline’s best friend and ex-boyfriend are among the missing. Perrie, along with her friend August, go on a pursuit to search for them in the mysterious museum. Could the elusive Quinsey Wolfe’s Glass Vault have anything to do with their disappearances?

WOW!!!
So the wonderful Candace from Literary Dust has finally released her first book!!!
The synopsis pretty much says everything. Perrie is still recovering from a break up and is trying to figure out if she has feelings for August, one of her friends. But one day the see a weird mansion on the road which they’re pretty sure has never been there. As the people closest to Perrie start to disappear, it isn’t long before her investigation leads her and August to Quinsey Wolfe’s Glass Vault. And before she knows it, she and August are thrust into a dark world filled with terror and they uncover a plot far more sinister than they ever could  have imagined.

Mystery meets horror meets twisted fairy tales meets tragedy!!! This book was so unusual and yet so unique!!!! I instantly connected with Perrie from the moment her cousin, Maisie, tapped her on the shoulder and she almost jumped out of her skin. I’m also pretty jumpy like if you just pat my shoulder and i don’t see you, i will literally scream.  And the weird thing is Horror movies don’t scare me at all! Anywho, Perrie was a tough and smart MC! I loved the realism of her thoughts-everything i was thinking i only had to read a few lines below and she’d echo my thoughts!
All the characters were unique and developed and that was a real bonus because normally the side characters are totally flat and neglected. I loved Maisie’s uniqueness and her obsession with Eye Patches! She was a bright and bubbly character with a super big heart!
My only issue with this book would be that at the beginning, the writing felt a little bit awkward but then about 10% through, the writing really started flowing as the story came together!!!
This book had to have one of the best cliffhanger/surprise twist endings-I did not see it coming AT ALL. I was staring at my kindle for like a minute after i finished trying to figure out if i want a sequel or just be morbidly happy about the ending? GAH i don’t know!!!! I just LOVED the ending. LOVED IT.

The villain, Vale, -we encounter him in the prologue-was extremely dark and creepy and yet there was this kind of allure to him. He was by far the my favorite character because i feel like there is so much more to him despite his thirst to destroy everything and everyone. The way he toys with people and manipulates them was genius-he reminded me of Iago from “Othello”. He was a fantastic villain you can’t help but love 😛

“This time he will make sure the world ends in flames.”

It was just so much more sinister then i ever could have imagined!!! It was beautiful!!!!!!!!I had the privilege of reading the prologue for book 2 and i am EXCITED, The originality of the story was off the charts!
Hope you guys have an awesome week!!!!!