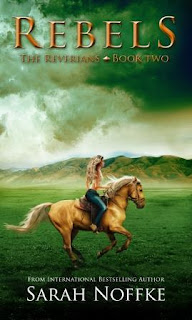 Em returns to Austin Valley, but there are many things that don’t add up about her homecoming. She’s left Rogue behind and is adamant that Dr. Parker must leave the Valley with her. Zack agrees to help her, but soon learns she’s not telling the whole truth when Rogue comes storming back. With the threesome reunited, they work on a plan to stop the Defect crisis. Their plan places all of them at risk, but Em knows they have no other choice. Hundreds of kids are being injected with poison every day and Nona, her sister, is one of them. Em Fuller has one mission and will stop at nothing to achieve it: Bring the government of Austin Valley down.

After running away with Rogue, Em lives happily with her new found love in their new house. Except that Rogue’s headaches keep getting worse and she can’t bear it anymore. Determined to make him better, Em sets off  in the middle of the night back to Austin Valley to seek the help of Doctor Parker and bring him back to Rogue,. Once there, she reunites with her other best friend Zack, but he seems more distant than usual and says things Em can’t make sense of. To gain Doctor Harper’s trust, she will have to break the mind control Vider has over him all while remaining hidden. Astonishing discoveries lead to the truth about the death of Rogue’s mother and the ultimate lengths that Vider has gone through to achieve his goals. Em is disgusted and the more she learns, the more she realizes she has to stop Vider at any cost.

Okay i LOVED the first book! You can find my review for that here. The only book that actually made me cry-as in full on tears and not sobbing- was clockwork princess because come on it was GENIUS. Rebels kept my heart on a whirlwind throughout the book, it kept me high with exhilaration and action. AND THEN IT BROKE MY HEART IN 2!!!! and cue to crocodile tears!!!! That ending-just-i can’t even wrap my head around it! I actually wanted to toss my kindle on the floor and i actually screamed in my pillow..i know i can be dramatic but i just love these characters! I took a while contemplating if i should give this book a 3 star because of it but then i though it was worthy of a five star! Because it really made me  feel-and that’s how i know this is a great story because i am so attached to the characters!

Em is growing stronger by the day,. Her determination grows and i can’t help but feel so proud of the girl who used to sneak into her dad’s office who is now breaking into medical labs! She becomes this symbol of rebellion-even though her rebellion only consists of Rogue, Zack, Nona, (Parker & Tutu?) and herself…she doesn’t let that dampen her goals. i Think my only problem with her was the fact that she couldn’t see that Zack loved her.

One of my favorite things about this book is the “bad guy”-Vider. I  don’t know how the author managed to make me hate him even more than i did before-he is the most repulsive and cruel dystopian  villain i have ever read about. The plots associated with him were just GENIUS! I loved every second of it and man i really want him to die!!! He doesn’t even deserve to live after what he’s done! I won’t tell you what-read it and feel the disgust and shock for yourself.

The side characters are all well developed and we really come to love each and every one of them! For example Tutu (Em’s grandma) is hilarious and cheeky, Nona is a hell of a determined fighter and Ren (Em’s uncle) never fails to make me laugh! He really has this attitude thing going on but you know he has a soft spot for Em and i loved their banters! Definitely one of my favorite characters!

I know book 3 will be EPIC. Th last part of Book 2 left me heartbroken and i wish it was false-i really wish. But it feels like its definite and i have a feeling Em will be completely warrior-like. She will be deadly and she will create the best rebellion yet in the YA world! For me, this rebellion actually surpasses that of “Mocking Jay” because Em is doing everything herself. She isn’t merely a symbol-she is the root of rebellion! The emotion in that last chapter-just wow.
Sarah Noffke is definitely taking the dystopian world by storm and i can’t wait to see what happens next!!!