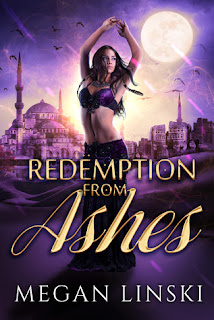 Her destiny will cost her everything.

It has been three years since Queen Bennua last saw the devil himself flee her borders, and her kingdom warily stands watch. Sahrahn has fallen into chaos, with rumors of countries being flattened at the wrath of Akshalad, the great eagle who seeks to devour the souls of men. Cities burn, entire communities are slaughtered, and Bennua’s faith in Alshams’ is shaken to its core as she witnesses cruelties beyond all imagining. With her beloved Raider Prince by her side, Bennua finds that she is to play a crucial role in a great battle between djinn, men, and angels, a fight that will determine the fate of the world. Carrying the future of Sahrahn, Bennua’s only hope is not revenge…but redemption.

Bennua has lived for three years knowing that her kingdom and herself are far from safe. Sorrow plagues her family when they realize that a curse is upon them, one that ensures the newborns do not survive. She knows Rukuh is planning something big but she could never expect the extent to which he would go for his hatred. Bennua looses everything and yet finds that she is the only one who can protect the whole lands. As her journey to discover the truth about herself develops, she discovers that she is a way more important figure in the war than she could ever have imagined. With Zahid, her trusted servant, Nuri, and her djinn friend, Bennua will have to win over the other sultans and lead the war against Akshalad.

Megan Linski has seriously done it again! I can’t even describe my feelings for this book! Three years after we left Bennua and Zahid, coming back to them felt like we were actually revisiting them! The characters have become so real that it was easy to imagine them taking a life of their own and that we weren’t simply reading their story but rejoining them at a moment of their life!

Bennua shows proof of immense strength in this book. She is really what a queen needs to be, she fights for what she believes in. I hated that the other sultans did not trust her because she was a woman but Bennua’s ability to surpass their expectations really left me cheering her on, I loved that she never felt like she had to prove herself to them, she only needed Zahid’s faith in her!

The author did an amazing job at revealing all the secrets in this book. The magic didn’t totally overpower the main theme which is war but contributed greatly. We finally got to see the mystery behind Nuri and there are so many aspects that come into play that you could never have imagined, so many twists you never saw coming! I LOVED the playful banter between Zahid, the flying carpet and the djinn, it was just so cute!!!

There was so much loss in this book and a lot of heartache…We get to learn more about the djinns and the book once again becomes an adventurous journey that i really enjoyed. Saying it was action-packed is an understatement. There was this scene where Bennua went through something so atrocious i couldn’t even-i couldn’t even read that scene without my stomach clenching especially when Zahid was in tears.

I read a tiny expert from book 4 at the end of the book AND OH MY GOD KILL ME NOW I NEED IT SOOOOOOOOO BAD!!!! I honestly thought this series was over but that little extract? That tiny little thing Megan decided to torture us with? IS PURE GOLD!!! This series is taking a turn for modernism where we encounter the same characters but in our world!!! AND I GET THE FEELING WE GET TO WATCH THEM FALL IN LOVE ALL OVER AGAIN!!! It will be so awesome to see how they join to the Bennua and Zahid we know so far.

Overall a GREAT yet bittersweet ending because Bennua has lost a lot but seriously i cannot get over that teaser for Book 4!