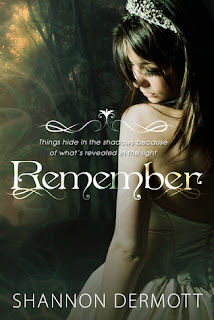 When sixteen year old Charlize finds herself unmistakably lost in the forest with no memory how she got there, it was easy for her to assume the angel face boy who saves her was there to. But little did she know that couldn’t be further from the truth.

With a brush of death, she finds new reasons to live after the unexplained death of her father. Her only regret in last three years was letting the one boy she could have loved get away.

Plunged into a world not of her making, there are those that will hunt her, a foe that calls her Little Queen, and her torn heart. Most of all, she will have to remember and face her memories if she is to survive.

Charlie is haunted by her father’s death. She can’t understand how he died and can’t help but think someone had a hand in it from the nightmares that plague her. He ex-best friend Alex has been paying more attention to her and her old feelings for him surge up again but she doesn’t know if she wants to rekindle their friendship since she was the one who broke it. Then one night. she finds herself in the woods with torn clothes but no scratches. A mysterious boy named Peter escorts her home but he can’t seem to keep his distance despite the fact that he should. As their relationship intensifies, Charlie is drawn into the unexpected world of the supernatural where even Alex is keeping his own secrets. Caught in an unexpected love triangle and a fight for power, Charlie will have to survive the overwhelming secrets and find out exactly what happened to her father-or it could cost her, her life.

Synopsis looks great right? The book was great! Amazing even..but then why 3.5 STARS???? Grammar mistakes and missing words!!!!  IN THE FIRST PARAGRAPH OF CHAPTER 1. And for a book that was published about six months ago-that’s kind of a big deal. At first i thought i could ignore it but the one in the first paragraph of a first chapter really bugged me. I mean the first chapter is supposed to captivate you and make you want to keep reading. But anyway that kind of threw me off. I know there are grammar mistakes in my reviews sometimes..but for a published book i expected more.

So why did i keep reading? Because the plot was great! It is definitely an amazing book! Absolutely thrilling and enticing setting! You really do not see that ending and figure out what we’re dealing with until Charlie does..so it was pretty cool to be on the journey with her and not in advance.

And let’s not mention the guys! Peter and Alex? DROOL. Not usually a fan of love triangles but this one wasn’t so bad. Both guys were incredibly hot, sweet, funny and yet unique.

Charlie as a protagonist was pretty much awesome. She has a don’t-mess-with-me attitude. She’s strong and does not allow herself to be bullied. Definitely not vain-just normal. And i guess that’s what i liked about her. She’s someone you can relate to and cheer on.

This book has AMAZING potential.I seriously see it overpowering twilight. I recommend this to everyone but it would be even better if an editor  could come and touch up this diamond in the rough!!! I did like the book and i’m interested in seeing what happens next!