Skip to Content
Home / ARCs from authors / REN: THE MAN BEHIND THE MONSTER ARC REVIEW 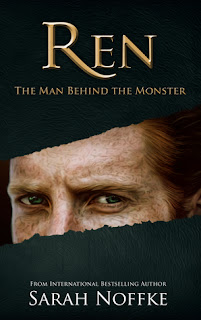 TITLE: Ren: The Man Behind The Monster
AUTHOR: Sarah Noffke
SERIES: Standalone (P.S THIS IS NOT A YA NOVEL)
PUBLICATION DATE: November 21 2015
PUBLISHER: One-Twenty-six Press
SOURCE: Free ARC from author in exchange for honest review

Born with the power to control minds, hypnotize others, and read thoughts, Ren Lewis, is certain of one thing: God made a mistake. No one should be born with so much power. A monster awoke in him the same year he received his gifts. At ten years old. A prepubescent boy with the ability to control others might merely abuse his powers, but Ren allowed it to corrupt him. And since he can have and do anything he wants, Ren should be happy. However, his journey teaches him that harboring so much power doesn’t bring happiness, it steals it. Once this realization sets in, Ren makes up his mind to do the one thing that can bring his tortured soul some peace. He must kill the monster.

Our favorite Brit from the Lucidites and the Reverians is back with a novel of his own!!!
i was so excited going into this book because i thought that we would get to know why Ren was such an obnoxious butt, but i got far more than that!
Ren is a super unique and intriguing character. He is very powerful and has not found a “good” way to deal with the powers he was given. He is self-destructive in the sense that he throws away any happiness he has.
What i liked about Ren was his ability to lead you. He was so charismatic and enigmatic that you didn’t find yourself hating him but appreciating his beautifully broken character itself. He never tried to pretend to be something he was not, he knew he was bad and didn’t try to deny it. He had this “i don’t care attitude” and instead of disliking him for i,t you found yourself encouraging his reasoning, because like i said he has a way of making you see things through his narration in the way he wants.
He meets his perfect match in Dahlia, a confident woman who is able to verbally par with him and is not affected by his powers! We could say that the reason they fell in love was only because Ren’s powers didn’t work on her and he liked the “not knowing” in their relationship but even if his powers could affect her, she’d still be his perfect match!
i HATED Em’s mother in The Reverians and in this book (she’s Ren’s sister) we see that she’s always been evil and disgusting. She is such a disgusting and vile character i could understand why Ren loathed her. The way she treats her mother just because she’s not a dream traveller was horrific.
He makes a lot of mistakes and doesn’t necessarily learn from them, making him much more humane! He would make you laugh at his wit and sometimes make your heart break at the same time…we learn of his harsh childhood and the years after when he was trying to find out who he really was.
This book is really hard to read if you haven’t read the Lucidites or the Reverians because you will find it extremely hard to like Ren. If you read the other books, you will find yourself intrigued by this character and will definitely want to know more!

TILL FEAR DO US PART REVIEW