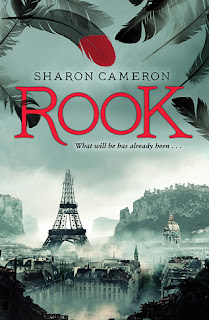 History has a way of repeating itself. In the Sunken City that was once Paris, all who oppose the new revolution are being put to the blade. Except for those who disappear from their prison cells, a red-tipped rook feather left in their place. Is the mysterious Red Rook a savior of the innocent or a criminal?

Meanwhile, across the sea in the Commonwealth, Sophia Bellamy’s arranged marriage to the wealthy René Hasard is the last chance to save her family from ruin. But when the search for the Red Rook comes straight to her doorstep, Sophia discovers that her fiancé is not all he seems. Which is only fair, because neither is she.

As the Red Rook grows bolder and the stakes grow higher, Sophia and René find themselves locked in a tantalizing game of cat and mouse.

The Red Rook is a savior. He frees all the prisoners who have dared to question the new revolution, They are ruthlessly executed by “the razor”. But as time passes and the executions rise, the Red Hook will attempt the impossible. Sophia Bellamy is not a fan of her would be fiancee, Rene Hasard but she has to marry him if she doesn’t want her father to go to jail. But Rene is not what he seems and his cousin, Leblanc, is one of the leading figures of the new Revolution. Leblanc is almost obsessed to find out who the Red Rook is and when the search for the so called criminal leads straight to the Bellamy house and its residents, including Rene, lives are threatened and blood is shed. Both keep deadly secrets and both cannot help but start liking each 0ther despite the initial distrust and hate.

What a great read! Sophia Bellamy is smart, witty and tough. From the very beginning you can’t help but admire her audacity and courage. She really is not what everyone thinks she is. She would do anything for her brother, Tom. The whole book is a chase to find the Red Rook and save the countless innocent lives. There are alternative POV’s from Sophia’s to the Rook’s to Renee’s, and even Leblanc, and much more. Each POV left you in dread for the next, every single one of them CLIFFHANGER! Which totally compensates for it being a standalone!

Renee. Excruciatingly charming, hilarious, dramatic and strong. Oh can i add GREAT actor??  Renee was a ball of confusion for me. Sometimes he appears as a total flirty airhead and the next a calculating genius! Easy to understand Sophia’s frustration right? Well they make a great pair! Calculating geniuses the lot of ’em! You could never really figure out Renee’s real motives. I mean the situation he was in made him look bad on all sides and it was pretty tough to make him out to be innocent. Well he might not even be innocent at all with all those dark secrets *evil cackle*

Leblanc i think made a great “bad” character. he starts off as totally calm and confident but as the Red Rook starts to get bolder, you see him slowly loose his composure. He becomes obsessed and totally deranged, He hates the Rook with a passion and will stop at nothing to catch him and get a higher position. He is a little mad because he believes in a coin-tossing theory that is supposedly a “goddess”. Oh well, i think it made him even more evil! At the end i was like, ” whew that man is a total blubbering mess!”

Plot wise, the idea was great. I know a lot of people complained about the length but come on, it’s not that long! City of Heavenly Fire is WAAAAAYYY longer and dragged a few times. This one is ACTION-PACKED. so many confusions and secrets!! I think my only negative would be the lack of background. It is after all a standalone so there is no sequel to explain things a bit further. I would have liked maybe a little more descrription on the “new” paris…

Anyway if you’re looking for a great dystopian standalone, filled with romance and action, you’re in for a ride full of surprises! Great ending, great story, great writing, great-just give it a try 😛

Leave a Reply to Novels and Necklaces Cancel reply