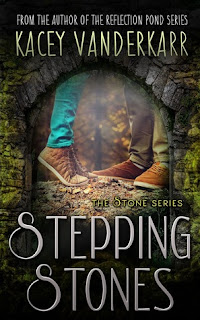 Stepping Stones (The Stone Series, Book 1)
Release Date –  August 25, 2015
Publisher – Urban Fey Press
Pages – 332
Genre – Young Adult Contemporary Fantasy
5 stars!!!
Links:
Goodreads* Amazon* Facebook* Blog* Twitter
Blog: http://kaceyvanderkarr.com/
Twitter: https://twitter.com/kacimari
Blurb:
Onnaleigh Moore is part of a plan—and it isn’t hers. When her brother dies in a car accident, Onna is desperate to preserve the tatters of her family. Any hope of finding normalcy vanishes when her mother runs off and her dad turns to booze to numb his pain. Onna’s grief is crippling, but the boy who showed up just when she needed him is helping her cope.

Everett’s presence is comforting, though he knows things—Onna’s name just before they met, where she lives, and sometimes he comments on thoughts she doesn’t say aloud. She pegs him for a stalker, or maybe psychic, but the truth is deadlier than she imagines. As their feelings for one another deepen, Everett confesses a horrifying secret: Onna’s brother is only the beginning of the plan, and some fates are worse than death.

About the Author:
KACEY VANDERKARR has a penchant for fantasy and frequently listens to the voices in her head—most of whom are teenagers. Her favorite place to write is an old salon chair in her kitchen, with coffee in one hand and adoring cats sprawled across her arms. She prefers her music loud and her skeptics quiet. When she’s not writing, Kacey coaches winterguard, works as a sonographer, and hangs out with other weirdos like her at the Flint Area Writer’s club. In addition to her novels, The Reflection Pond Series, Antithesis, and The Stone Series, Kacey’s short fiction is featured in Sucker Literary Vol III, Ember: A Journal of Luminous Things, and Out of the Green: Tales from Fairyland.

Onna’s life pretty much sucks in an EPIC way! For starters, her brother and her would-have-been niece die, her mother becomes a drug addict and runs off and her dad drowns his problems in alcohol and becomes suicidal. I honestly don’t know how she can even stay upright.

I absolutely fawned over her relationship with her brother. So adorable and soo cute. I made grabby hands at Caleb throughout the  book 😛 That made his death really more touching and sad. yeah this is not a spoiler by the way! Caleb..oh my god i felt like crying when he was gone!!

What i liked about Onna was her simplicity and the fact that she was normal. She had normal reactions and the author never promoted her as an ‘awesome hero’ type, more like a girl who’s gone through hell and is trying to maintain order in her life. Normally when the YA heroines push the guys away, they do it for totally dumb reasons and i’m always like ‘just pull him back’n kiss him!’ But when Onna pushes Everett away, i really sympathized with her. Despite their undeniable attraction, she really had her head on her shoulders and knew that she had to sort out her life first.

At first i felt that maybe the fact that Onna went through SO MUCH was quite far-fetched. But as i kept reading, a really cool supernatural aspect came into play. One you really do not see coming, so that solved that part for me!

What else can i say about this great book? Check it out! Beautiful writing and a totally unique plot will definitely keep you wanting more! keep reading for an expert! (WHICH FEATURES CALEB!!!)

AMONG THE SHROUDED REVIEW

DREAM OF ME ARC REVIEW