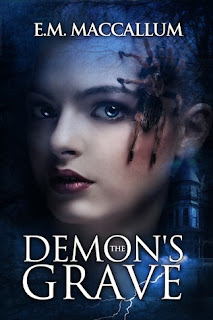 When strange shadows and messages plague Nora’s daily life she fears for her sanity. To escape questions from her family, Nora joins her friends on a weekend getaway. Despite not liking Aidan Birket, Nora finds his remote, Victorian house charming. Until they discover the marble doorway on the third floor and, against Nora’s better judgment, they open it.

Drawn into an unfamiliar place called the Demon’s Grave, the group face a charismatic demon and a set of Challenges. Six nightmarish realities for the six of them is the punishment. Those that make it to the end can go home, but those that don’t will be his forever. Friendships are tested, secrets revealed and sacrifices will be made.

Nora battles zombies, doppelgängers, eyeless bikers, and the demon–whose interests are more than just a game of cat and mouse. If it’s all in her head, then it should be easy. But, if not, it means the demon knows everything and her past and the death of her twin sister.

So basically this is a story about a group of college students that decide to go camping and end up at one of their friend’s inherited victorian house. But before going on the trip, they’ve all been plagued by weird nightmares and Nora in particular who has been to countless therapists thinks that she’s going crazy again when she finds a weird note in her textbook with her handwriting and an invisible finger tracing words in her shower stall.
I think this book was really good and throughout i could see it like a movie in my head. But there was a ton of cliche stuff too. I mean Phoebe, is the one that causes all of this simply because she wandered upstairs all alone in the dark while everyone was yelling at her to get down. This book takes place in the modern world, she wasn’t drunk so after knowing the cliches of a typical horror movie how much could we blame humane curiosity? She should be like tied up to a tree or something! I guess it’s the group’s immature behavior that threw me completely off. But i do see this as a movie in my head. Like an Action/horror but if you read it, it will definitely give you a movie vibe.
The characters were all super unique. You had Phoebe, the brave and reckless one, Cody the quiet athlete who never talked, his girlfriend Robin who was all cute and talkative, Read the handsome player, Aiden the new guy who’s trying to fit in and Nora. Nora, i couldn’t get a specific read on her. She was an okay character but nothing about her really stood out unlike the rests. And sometimes she would say things that i couldn’t quite understand so i couldn’t really follow the dialogue. I liked the idea that she thought it was her dream and that she would wake up.
The writing was also fine but the plot was amazing! Sometimes it scared you and other times literally made you shudder and at times just plainly creeped you out, The challenges were tough and horrible, You had to watch as they were separated, tossed together again and then separated again. There were loads of things that was just plain weird but this book will definitely keep you at the edge of your seat because the action and mystery is non-stop from the beginning to the end.
I wished we’d gotten more of the demon because he only popped up a few times, Cliffhanger alert! Loads of things have been left unanswered but one of my complaints would be the lack of romance. I love romance in all my books and i know this one is an action/horror book but there were many hints at romance, even if they weren’t developed i wish we had some of it. There were loads of repetition about “hot breaths” on her neck and the like so that kinda irked me a little….
The whole book revolves around them getting out alive and around the mystery that is Nora because she seems to be super important and she doesn’t know why. More and more questions pop up instead of answering the previous ones. I think that is a negative and a positive in the way that it keeps your mind reeling but it also frustrates you to no end…
So if you guys are into action-packed mystery filled books this one is definitely one for you!