Skip to Content
Home / ARCs from authors / THE HYBRID REVIEW 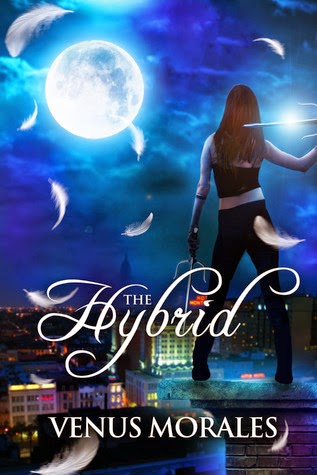 Ari is the daughter of Ares, the almighty God of war. She is raised in secrecy until her 18th birthday, when she ventures out into the mortal realm, only to be approached by an archangel named Julius, who bears a message from a seer. Unknowingly he stirs something within Ari. As her inner darkness torments her, Ari becomes confused and conflicted ‘with her emotions’ as her world is turned inside out the moment Julius steps foot into her life. Ari returns to her late mother’s coven to fight her crown little does she know, she’s fighting for more than her crown, she is fighting for her life. She has seven days to prepare for her trials, seven days to fight for her life as her darkness tries to consume her and an unknown enemy tries to kill her. Ari is forced to do the one thing she knows she must do, by forging herself into the weapon she was born to be.

Ari is the only one of her kind. Not only is she the daughter of a god but a princess too, meaning she’s like a vampire but has a dark version of herself inside of her, constantly battling to take over. One night when fighting demons, Ari is approached by Alaris and Julius. Alaris is a mystery and vanishes before she can question is identity.  A couple of years back, four angels disappeared and were taken hostage to the underworld. Julius claims that he is the son of one of these angels and has escaped because he is supposed to remain at her side in the upcoming war. But as Ari fights her darker self, she uncovers secrets about her past and future. Julius it seems is not what he appears to be but will Ari be strong enough to keep control over her body and reclaim her throne? What is her role in the war?

Ari was a really strong character, She’s blood thirsty-literally and metaphorically-being the daughter of war and having vampire characteristics. To say she kicks butt is an understatement. Yeah she can be arrogant but it was kinds funny to see her swearing at demons when they got in a good hit! Then we have her best friend, Ily. Ily is an original vampire queen. She has got to be my favorite character! She’s fiercely protective of Ari, she’s loyal and funny as hell! She complains about breaking a nail and all that but she’s lethal and has an amazing heart. They really were the most awesome BFF pair!!

Another aspect i like about the book was the fact that the author included Ares and his mother, Hera. They could have just mentioned that Ari was Ares’ daughter but it was so much better to have him in the flesh! Then we got grandma Hera binding daddy Ares when he goes all war hungry when someone hurts his daughter! Hera and Ily were awesome together. They were always talking about the latest trends and so on, Those little things were just so unexpected but everything came together wonderfully. I mean how could you expect goddess Hera to order shoes from a vampire queen right?

The romance was sweet and well written. The story line was really original and well interpreted! I’ve never read anything like this before! It takes place in new Orleans and i did get ‘the originals’ vibe at the start but then everything changed! I did wish we got to see a little more of Alaris, he was a real mystery throughout the book.

Archangels, fallen, vampires, hybrids, gods and an evil self makes this book a real supernatural showdown! I can’t wait to find out what happens next!