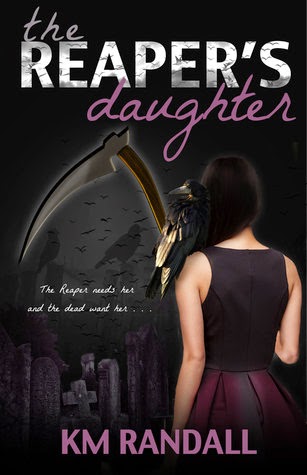 I’ve always felt like an average girl … except for my strange relationship with death. You could say I like to court it. Whether I’m soaring through the air as a flyer for Specter University’s cheer squad, or speeding down the steepest mountain with only grace and balance keeping me from an icy end, I’ve always needed to feel a rush. But now Death is courting me―in more ways than one. First, there’s Rishi, a rogue death deity who has a penchant for annoying me nearly to my grave and whose intense gaze has the power to see right through me. Then there’s Hades, who I’d rather had stayed just a myth. Now that he knows I exist, he’s not going to leave me alone until I meet the same end as my mother.
Oh yeah, did I forget to mention her? I spent my whole life thinking she had died when I was a baby, but now I’ve found out she’s much more than dead. Fifty years ago, Hades banished my mother from the underworld and took away her ability to cross over souls―souls that have wandered lost through the world ever since. Now she wants me to clean up the mess. You may have​ heard of her before …
They call her the Grim Reaper.

Blake is an adrenaline junkie in the eyes of everyone. Her dad is constantly trying to get her to pipe down her death wish but nothing seems to be working. Everything is going great in life, she’s in the cheer leading squad, has an amazing best friend and is seriously in love with her boyfriend and he with her. But everything changes one night when she cheers for a school game and she meets the eyes of a smoldering young man staring back at her from the bleachers. Blake is thrust into the world of death where she learns that she is the daughter of THE Grim Reaper. According to one’s belief, you are allocated a reaper. For example a Hindu’s soul is for the Hindu death deity to reap-which also happens to be Rishi’s father,

But Grim has been banished from the underworld and her scythe-her source of power-has been taken by Hades, Her sister is also his captive and has hidden the second scythe. If Hades gets his hands on both well let’s just say unicorns won’t be flying around anytime soon.  Grim’s souls have not been reaped and they’ve accumulated because Grim can’t reap them anymore-leaving the job to Blake. She will have to cross souls over, find the scythes, rescue her aunt, deal with the infuriating Rishi all while trying to keep the remnants of her mother’s humanity intact.

If the synopsis hasn’t drawn you in then i don’t know what will. This was a completely original tale full of adventure. Blake was smart  and funny. I liked the idea of Grim loosing her humanity making her cold and inhumane as Death should be. I loved the side characters like her best friend, she was so unique and completely loyal. Blake herself was funny and strong.

The romance i guess you could say was alright. I just didn’t fangirl over them as a couple even though Rishi is hot!! Sometimes i felt like i liked Geoff better!

This book has it all, a feisty heroine with mother problems, a funny but loyal best friend, a little romance, some action, various types of mythology and-come on guys this is a book about the reaper’s daughter-GO GET IT!

ALL THE STARS LEFT BEHIND ARC REVIEW