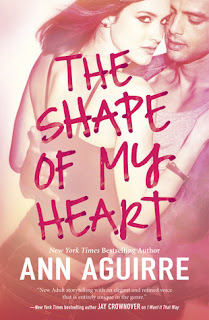 Some people wait decades to meet their soul mate. Courtney Kaufman suspects she met hers in high school only to lose him at seventeen. Since then, Courtney’s social life has been a series of meaningless encounters, though she’s made a few close friends along the way. Especially her roommate Max Cooper, who oozes damaged bad-boy vibes from every pore. Max knows about feeling lost and trying to move beyond the pain he’s been on his own since he was sixteen. Now it’s time to find out if he can ever go home again, and Courtney’s the only one he trusts to go with him. But the trip to Providence could change everything because the more time he spends with Courtney, the harder it is to reconcile what he wants and what he thinks he deserves. It started out so simple. One misfit helping another. Now Max will do anything to show Courtney that for every heart that’s ever been broken, there’s another that can make it complete.

Courtney lost her boyfriend in high school and this has left a void inside of her that has never been filled. She is constantly reminded of his loss and is not ready to let him go yet. She’s a i’ll-have-you-laughing-in-a-sec protagonist. She’s snarky, spunky and hilarious but has an amazing heart. She’s fiercely loyal and protective and in the end you can’t help but love her. At first i thought it was totally inappropriate when she was being funny in serious situations but the deeper we got into the story, the more we realize that despite her tough attitude, Courtney is actually empty on the inside and her jokes and snark protect her from pain. After her boyfriend died, she struggled through drugs and depression. Anyways her humor really lightened the tense atmospheres and  added to this bittersweet love story.

“I wasn’t harboring a secret desire to take off my glasses and flip my hair, so my secret love interest would realize I was beautiful all along. In my view, my looks supplied simplicity. Anyone who got with me wanted the real me, no question.”
Max is a broken character. He was incredibly sweet and yet oozed bad boy and charm. So basically he comes from a long line of drunken idiots and one day he decided to get his little brother out of the house. They had an accident and his brother couldn’t walk anymore. His dad said some pretty mean stuff to him after that. Hurt and consumed by guilt, he left town and moved into the apartment cutting all ties with his family.
Everything changes when he learns of his grandpa’s death and he has to go home. He’s scared that his brother will blame him as well as his whole family so he gets his best friend, Courtney, to go with him. When his dad starts to criticize him, i wanted to punch him and start a cheerleading squad for Courtney! The loyalty she showed!! She defended Max and really out witted his father all while being respectful. I was so giddy when she won verbal fights!!
The story had a great plot and you felt the heartbreak and happiness along with the characters. You actually felt like you were on this journey with them. Another thing i really appreciated was the no insta-love part. And there was no cheesy i’m-in-love-with-my-best-friend either. I loved seeing the tight friendship between the two and watch it evolve into something else. Max wasn’t a macho-man either. He always respected and saw Courtney as an equal and never hid the fact that she was the pillar anchoring him to stay grounded.
I also liked the background and the friendships. And also Courtney’s rise to independence was admirable. She really stuck with what she wanted. She never pretended she was anything but herself and is extremely stubborn!
The chemistry between these two characters was almost tangible! I have no doubt that these two are soulmates! I can’t wait to read more from Ann Aguirre and her beautiful love stories!!!