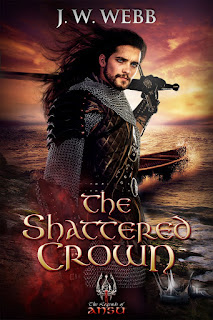 Corin an Fol, Longswordsman and ex mercenary has but one objective: retire early and settle down. Unfortunately the gods have other ideas. When Corin arrives home after many years fighting foreign wars, he finds bad news waiting for him. The High King has been murdered and his crystal crown, the Tekara, destroyed.

The Tekara is no ordinary crown. Wrought of solid crystal it contains a charm of strength that has protected the Four Kingdoms for millennia. But the Tekara is vulnerable to one thing: treachery. So when Caswallon the schemer secretly places the crown on Prince Tarin’s head he knows it will shatter, causing the realms to fall apart. He stands to gain as soon as it breaks.

Though many suspect Caswallon, who is known as a sorcerer, only one dares stand against him: Queen Ariane of Kelwyn. She is visited by her goddess in a dream who warns that Prince Tarin has fled with the shards of the Shattered Crown,and only by finding both Prince and Crown can the Four Kingdoms be saved.

After being promised gold, Corin an Fol reluctantly joins the queen’s desperate quest to salvage the missing shards. But Caswallon is on to them and already watching their every move.

Let me just start off by saying, WHAT AN ADVENTURE!
I have to admit that i got pretty confused at times to situate who is who, and who is allied to who…there are so many characters! But the effort was so worth it because all the characters bind together and form part of this intricate action-packed plot! Each and every character was super well written and unique, you could tell the author put in a lot of extra work in them and they didn’t feel like side characters but major characters because they were so well developed.
Corin was pretty awesome. He’s this badass ex warrior with a brutal and sad past that readers sympathize with. He just wanted to go home and live out his life but his ex boss sends him on an errand to accompany the queen on her quest for guidance. I loved that he was grumpy most of the time, it kinda made him less of “cliché” hero. He’s not trying to be a hero, he just does what’s in his best interest but somewhere along the way he starts to care for other people. As for queen Ariane, she was so kickass. She swears, she fights-not your typical queen-but even after becomign a queen at such a young age, she’s extremely courageous and intelligent.
So basically, although this is book 2, you don’t have to read book 1 because it takes place 1000 years after book 1! Though i was absolutely thrilled at the mention of some characters from book 1! Basically Ansu was a land where two species were at war; the Gold folk (Elves) and the Dog-Men. There are fae but they’re not really involved in the story but maybe they’ll show up in the next book. They’re older then the Gold Folk and the Dog Men. So then this host of humans (a character from book 1) arrives and allies with the elves to destroy the Dog Men. They win the war and in exchange, the Gold Folk give the human army  a crown to protect them from the rise of the Dog Men. And for centuries, the humans ruled but the story takes place when the current king is betrayed by his counselor- a sorcerer who bids  the prince to steal the crown. The crown is destroyed, the Dog Men are on the rise, kingdoms fall, allies are made and yeah the works of a great fantasy book!!!!
My favorite character had to be Rael, he’s a bad guy, but he was so intriguing! He’s a master assassin and kind of a psycho but i loved reading his part in the novel! (Can i just say on a side note that there was a lot of farting in the novel lol :P). The author does an AMAZING job at writing the villains! I think i actually like them more than the good guys!
This book was LONG, and i was scared i’d get bored but there was not one dull moment! Action filled this book to the brim! I am a big romance fan so i did feel a little lack of it in this book but i can’t fault it for that because it would have driven the focus away from this complex plot…But the novel jumps right in into the action, there is no long wait for the book to actually start. Right from the beginning you feel the sense of urgency and danger that just throws all the characters into action. There are other characters that have maybe one or two POV’s in this book that i hope will become major characters in book 2 because they are super intriguing!
I was pleasantly surprised by this book and i will most definitely be reading the next one! If you guys like Game of Thrones, Lord of the Rings or, like me, felt a need to read an epic fantasy after Empire Of Storms by Sarah J Mass, then definitely pick up this one! I’m talking dragons, magic, fey, gods, dark sorcerers! The author has left us with quite a few unanswered questions that makes you need book 3 right away! It’s a rich and epic tale of heroes and loyalty! Pick this up and become ensnared in this action packed quest!