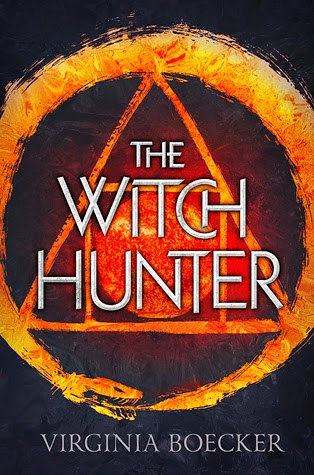 The magic and suspense of Graceling meet the political intrigue and unrest of Game of Thrones in this riveting fantasy debut.Elizabeth Grey is one of the king’s best witch hunters, devoted to rooting out witchcraft and doling out justice. When she’s accused of being a witch herself, Elizabeth is arrested and sentenced to die at the stake. Salvation comes from a man she thought was her enemy. Nicholas Perevil, the most powerful wizard in the kingdom, offers her a deal: he will save her from execution if she can track down the person who laid a deadly curse on him.As she’s thrust into the world of witches, ghosts, pirates, and all-too-handsome healers, Elizabeth is forced to redefine her ideas of right and wrong, of friends and enemies, and of love and hate.

Elizabeth and her best friend Caleb are two of the best witch hunters in the land. Together they capture witches and warlocks and bring them to the inquisitor, Blackwell. They can catch but not kill them. Killing them as well as being found guilty of witchcraft is a direct path to being burnt at the stake. Elizabeth has always loved Caleb but is sure he doesn’t feel the same way and on one drunken night, Elizabeth’s safe world comes crashing down around her. Witch herbs are found in her pocket and she is accused of being a witch, even though she isn’t. She is dragged into prison and Caleb promises to get her out, But hours turn into days and days into weeks. The night before she is scheduled to die, a famous and wanted wizard appears in her cell and takes her away. In exchange, she has to find the person who has cursed  him and ultimately stop his death. And despite her upbringing to capture witches, she finds herself caring for the wizard and his friends, especially the handsome healer, John. But everything Elizabeth believes in is soon shattered as she realizes that everything she has been taught was a trick. But why did the wizard rescue her and not someone else? What is Blackwell’s real goal?

The Witch Hunter was one of the best witch books i’ve ever read! I am obsessed with the Salem Witch Trials and this story had that background and takes place in the 1500’s if i remember what was said in the book. And i liked that the book wasn’t too predictable…i mean predictable would be a witch hunter being a witch herself. This story stuck to the fact that Elizabeth is a witch hunter and not a witch.

I loved the romance in the book! Even though i was wrong about the love interest… So we know she’s in love with Caleb but i wouldn’t  call it a love triangle. At first i thought she had something going on with George, one of Nicholas’ friends. No wait scratch that, when i read the synopsis i thought Nicholas was the love interest but when i found out he was old, i got that out of my head. Then i thought it was George, he’s hilarious and sweet and they seem to get along fantastically. But when nothing happens i think they’re more like best friends. I never ever thought John was the love interest. Yes he was absolutely handsome but there was absolutely no clue that they were attracted together! So no insta-love. But when Elizabeth starts to have feelings for him you see their relationship grow. But he’s a perfect love interest! He’s sweet and lovable!

So the characters in Nicholas’ family are-Peter (a pirate), his son John( healer and love interest), George and Fifer (Nicholas’s apprentice). I loved Fifer! Despite her initial dislike of Elizabeth. She was feisty and her relationship with her “boyfriend” was absolutely hilarious! I really hope we get treated with a novella from her POV! She’s a kickass character and i wish we knew more about her and her boyfriend!

Even though i loved the romance i wished we had a little more of it. Also i think this booked lacked stuff about Malcom-the king. I won’t spoil it but let’s just say he is very important in the actions that led to Elizabeth’s imprisonment, I hope that in the next book they come face to face or something. He was mentioned a lot in the book but we never meet him and that’s unfortunate because as i said he is the reason Elizabeth had the herbs in the first place. So i really really want to see him in the next book.

Other than that, it was an amazing book with a steady pace and loads of mysteries and unexpected revelations. This is a series i will definitely be following!