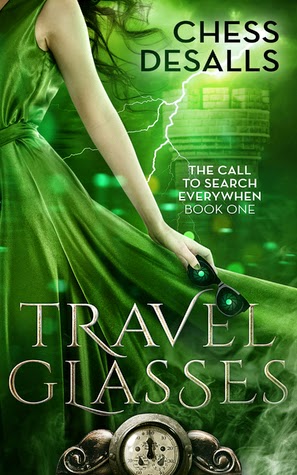 Calla Winston’s mobile devices sit in a corner of her room, covered in dust. Weeks ago, she shared photos and laughs with her best online friend. Now, after having felt the sting of betrayal, she prefers being hidden and friendless. She equates privacy with security and technology with pain.Then she meets Valcas, an otherworldly time traveler who traverses time and space with a pair of altered sunglasses. When an ethereal being knocks Calla to the ground near her family’s lakeside cottage, Valcas uses the Travel Glasses to help her escape. He offers his further protection in exchange for a promise. Intrigued by Valcas and the possibility of time travel, Calla accepts. That is until she learns that his search for her was no mere coincidence.Calla sets off on her own, taking the Travel Glasses with her. Torn between searching for her estranged father and reuniting with the rest of her family, she tracks down the inventor of the Travel Glasses in hopes of discovering more about Valcas’ past and motivations. The Travel Glasses take Calla’s mistrust of technology to all new levels. But without them, she’ll never make it back home. With Valcas hot on her trail, Calla hopes to find what she’s looking for before he catches up.

I don’t really like Calla 🙁 She really irritated me at the beginning…so basically the situation is this: Calla is walking next to pond and she falls down. Valcas helps her up and tells her they’re going to dinner tonight. She says yes. that’s it. Why the freak would you agree to go on a date with someone you’ve literally known for a 3-sentence conversation! Her excuse was that she was dazed after the fall. After that, there’s a blinding light and Valcas says, ” There’s something after you! Quick jump on my jet ski and we shall ride to safer horizons!” Calla just jumps on a jet ski with a total stranger and into another time period where Valcas is a prince. He tells her to pose as his bride. Does she have an objection? No. Does she ask why? NO!!! Her actions and way of thinking were totally not normal! I mean someone takes to another century and asks you to pretend to be his bride. Don’t you freak out!? WELL DO YA?? Calla surely doesn’t! The beginning i have to admit was pretty senseless  and boring but if you manage to push past that you get a real gem of a story!

I think Calla is the only thing i didn’t like about this book. I am a bit weary of time travel books because they just and up confusing me but this one was clear and super intriguing. Calla plunges deeper and deeper into Valcas’ past and we uncover so many secrets and ties as well as the origin of the glasses that cause people to time travel! There’s even this secret society of time travellers!! I loved the time lapses between each of Calla’s journey. She meets Valcas’ very very very old cousin and her boyfriend and all that stuff! It was just pretty cool to make the connections!

Not a lot of action but there are so many mysteries surrounding that time travel and Valcas. He was a very intriguing character because you kept seeing all these different faces of him.  The concept of the glasses itself was pretty original! If you wear them for a certain amount of time they change your eye color. For example, a couple of centuries back Valcas’ eyes were emerald green and now they are like the light blue of a moon. There was also this thing about the aging of travellers which is pretty hard to explain but everything was just so well thought out and complex!! Just how i like my boox 😉

Despite my rocky relationship with the beginning, Valcas’ and Calla’s love definitely grows into something much more realistic and i really hope we get to see more of them in the next book! I also believe the second book deals more with the traveller society because Calla has apparently broken some very important rules…TROUBLE!!! And in the words of most of my  teachers when a student is in trouble :DETENTION!!